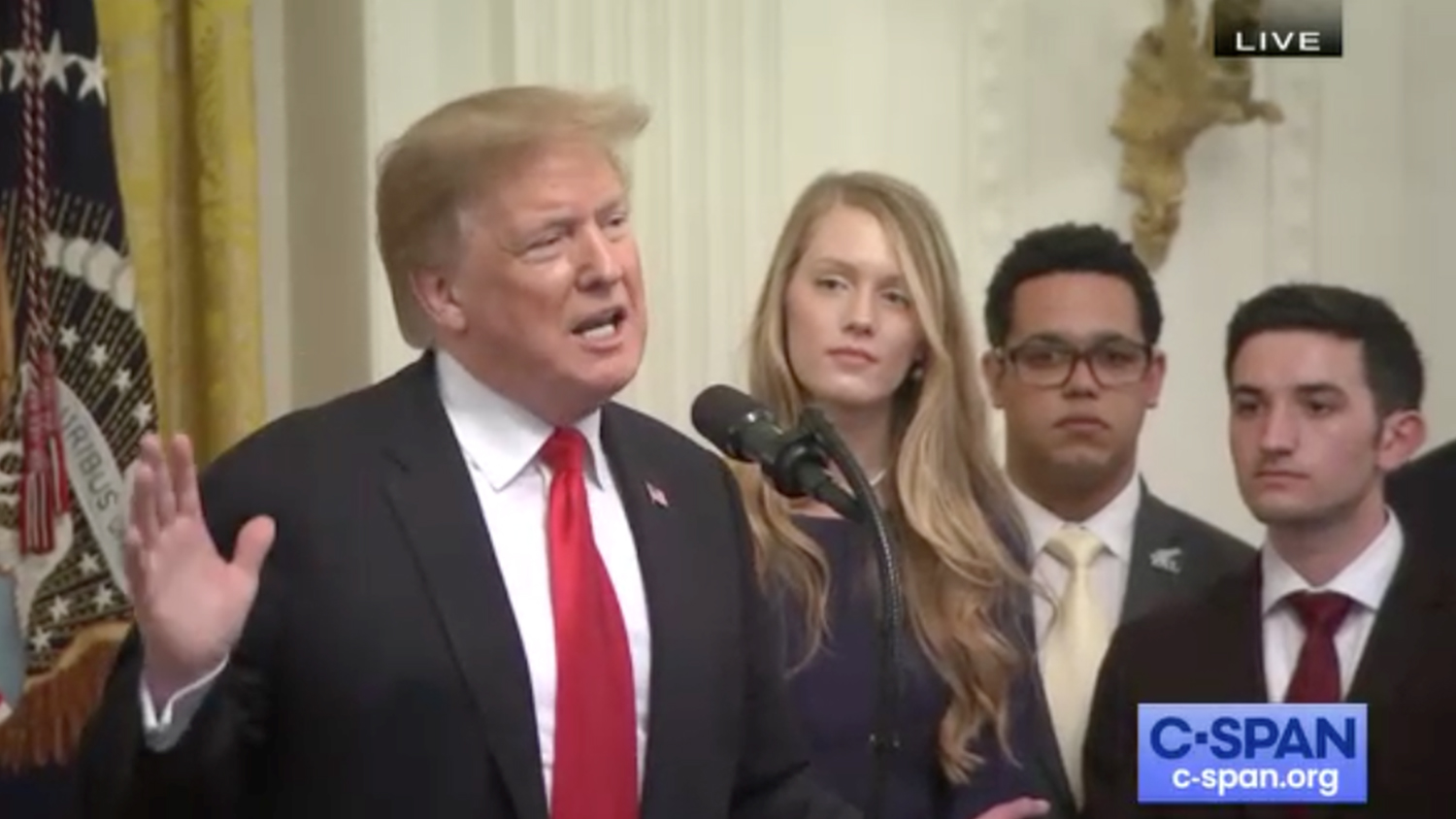 Public universities have a responsibility to respect and protect the First Amendment rights of their students.

That should be common sense.

Yet, here at Alliance Defending Freedom, we’ve seen that this is not the case. The ADF Center for Academic Freedom has represented students and professors at public colleges and universities across the country where school officials have ignored and trampled on their First Amendment rights.

It is because of these many violations of student rights that President Donald Trump signed an executive order on March 21, 2019, requiring public universities to respect the constitutionally protected free speech rights of students in order to continue receiving federal research funds.

Four students and former ADF clients were on stage with President Trump as he signed the order.

Isaac was on the campus of Kellogg Community College in Michigan talking to students as they passed on the sidewalk. He and a few others were there to help recruit members to start a campus chapter of Young Americans for Liberty. They weren’t blocking the sidewalk or access to any of the buildings. They were simply asking, “Do you like freedom and liberty?” and handing out pocket-sized copies of the U.S. Constitution.

Soon, a school official approached them and demanded that they stop what they were doing. Explaining that they had a First Amendment right to be there, the students continued. After all, the only permission slip students need to exercise their free speech rights is the First Amendment.

The school didn’t see it that way. Instead, these YAL representatives were arrested and placed in jail for at least seven hours. Simply for exercising their right to speak freely on campus. The ADF Center for Academic Freedom filed a lawsuit on behalf of YAL and these students. Eventually, the school agreed to change its policies to respect the rights of students to peacefully speak on campus.

Ellen was the president of the Students for Life chapter on the campus of the Miami University of Ohio, Hamilton. As they had for the past several years, the student group requested permission to put up a display on campus called the Cemetery of Innocents – a display of a few hundred white crosses that signify the number of lives lost to abortion each day, along with a sign explaining the memorial.

But university officials had not demanded trigger warnings for transgender displays, domestic violence displays, and “reproductive justice” displays in the past. It was clear they were singling out Students for Life for unfair treatment.

Ellen knew that she and her group needed to stand up for their rights – so she contacted Alliance Defending Freedom. And we filed a lawsuit on behalf of Students for Life. Thankfully, in response to the ADF lawsuit, Miami University of Ohio did the right thing. It changed its policies so that it does not unfairly discriminate against the viewpoints it doesn’t like.

As the president of the Students for Life chapter at Fresno State, Bernadette and a few other students received permission to chalk pro-life messages on campus sidewalks during Pro-Life Chalk Day.

But a public health professor on campus, Gregory Thatcher, had other plans. He recruited his class to help him erase the messages on campus. When Bernadette confronted him, Thatcher tried to claim that he was engaging in his own free speech by erasing the messages – which is ridiculous. Thatcher also proclaimed that “college campuses are not free speech areas” – which is completely false. The entire exchange was caught on video.

That’s why the ADF Center for Academic Freedom filed a lawsuit against this professor, who was acting as the speech police on campus, and was teaching students that the correct way to deal with speech you disagree with is to censor it.

Thankfully, in response to the lawsuit Thatcher agreed to pay a settlement and to undergo two hours of First Amendment training. In addition, a district court issued an order that prohibits him from disrupting future Fresno State Students for Life events. Meanwhile, Students for Life has continued to speak on campus and has even been instrumental in saving lives.

UMass-Amherst’s speech policy restricted all “speeches and rallies” to less than one percent of campus and only between noon and 1 p.m. each day. And that didn’t sit right with Nicholas, a representative for Young Americans for Liberty. He wanted to host and present speeches and to rally in other publicly accessible open areas of campus – which is his right, and the right of all students on campus.

So, he reached out to ADF, which filed a lawsuit on behalf of Nicholas and YAL.

Fortunately, UMass-Amherst updated its free-speech policy in light of the lawsuit, and ADF attorneys voluntarily dismissed the suit after the UMass Amherst Board of Trustees decided to change their policy to be more consistent with the First Amendment.


The bottom line is that universities should be a marketplace of ideas, not an assembly line for one, school-favored point of view. Today’s students will be tomorrow’s voters and civic leaders, which is why universities must demonstrate the First Amendment values they should be teaching students.

We are thankful that the Trump Administration is taking steps to address this issue, and the ADF Center for Academic Freedom will continue to advocate for these rights across the nation.