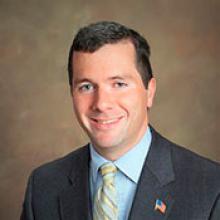 Seth Morgan is the CEO of MLA Companies, a financial service and advisory group. Under his guidance, MLA has become one of the largest business advisory firms in southwest Ohio.

Morgan entered politics as a young man, seeking to make a difference by putting to use his passion for public policy, philosophy of a responsible government, and love for America. He was elected to the Ohio House of Representatives in November 2008, and while serving in the minority he was chairman of the House Republicans’ Policy Committee.

In addition to his efforts in business and policy, Mr. Morgan served as a host of Think Talk Radio heard on 55KRC (Cincinnati) weekly, covering policy issues in Ohio and the United States. He is also the author of the book It’s About Liberty, Stupid!

Morgan serves in several advisory and board roles, including advising on state policy for Americans for Prosperity’s Ohio Chapter and serving on the board of Citizens for Community Values, the Ohio family policy council for the national organization Focus on the Family.

Morgan has extensive speaking experience on both policy and business issues, and has been recognized for his accomplishments. Some of those awards include “CFO of the Year” nominee by the Dayton Business Journal; recognition as one of Dayton’s “40 Under 40;” recipient of the Citizens for Community Values “William Wilberforce Award” for leadership; and recipient of the “Sheriff Gary Haines Memorial Award for Outstanding Public Service.”

Morgan, his wife Erica, and his three children reside in the Lebanon, Ohio area. He is a member of Centerville Christian Fellowship.