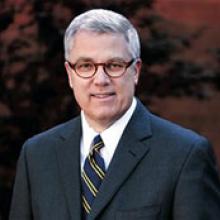 Alan Sears served as founder of Alliance Defending Freedom, building on his experience as longtime leader of the organization to strengthen alliances, forge new relationships, and develop the resources needed to ensure the ministry’s capacity to respond to opportunities. As the first president, CEO, and general counsel of Alliance Defending Freedom, Sears led all strategic initiatives from 1993-2017.

In his 23 years at the helm, he built an ADF team committed to a comprehensive legal strategy that includes training, funding, and legal advocacy—resulting in important roles in 52 victories at the U.S. Supreme Court, including Trinity Lutheran Church of Columbia v. Comer in the 2016-2017 term, Town of Greece v. Galloway and Conestoga Wood Specialties v. Burwell in the 2013-2014 term, Reed v. Town of Gilbert in the 2014-2015 term, and Geneva College v. Burwell and Southern Nazarene University v. Burwell in the 2015-2016 term.

Under Sears’ leadership, ADF attorneys won more than three out of four cases in which they participated and successfully defended marriage as the union between one man and one woman in 50 cases nationwide. The ministry also funded more than 3,000 grants and legal projects for allied lawyers and organizations.

Beginning with the launch of ADF in 1994, Sears provided strategic leadership in the training of 1,923 lawyers from 45 countries through the one-of-a-kind Alliance Defending Freedom Legal Academy, designed to ensure attorneys are fully equipped to defend religious liberty, the sanctity of life, marriage and family. These attorneys have reported more than $200 million in pro-bono/dedicated time.

Sears’ visionary efforts also resulted in the graduation of more than 1,800 outstanding law students—representing 227 schools and 21 countries—from the world-class Blackstone Legal Fellowship leadership-training program. This in-depth summer internship program helps equip these students to assume leadership positions to shape the future of law and culture across the globe.

Sears earned his Juris Doctor from the Louis D. Brandeis School of Law. While serving in numerous positions within the administrations of Ronald Reagan and G.H.W. Bush, he worked for the Department of Justice under Attorneys General William French Smith and Edwin Meese III, including service as an Assistant U.S. Attorney and Chief of the Criminal Section for the Western District of Kentucky. Sears was appointed director of the Attorney General’s Commission on Pornography and served as associate solicitor with the Department of Interior under Secretary Donald Hodel. A graduate of the University of Kentucky, Sears has continued his education with professional instruction at the Stanford University Graduate School of Business, Harvard Law School, Harvard Business School, and Pepperdine University.

Practicing law for four decades, Sears is a member in good standing with the American, Arizona, California, District of Columbia (inactive), and Kentucky bar associations. He has helped fashion the language for numerous state and federal laws and has testified before committees of the U.S. House and Senate, state legislatures, and many local governments and commissions. Legislators in 20 states have adopted his policy recommendations. Sears has assisted legislators and law enforcement officials from many countries and has spoken before committees of the British Parliament and the Vatican.

Sears’ numerous media appearances include television interviews and features on The Today Show, Nightline, CNN, Fox News, C-SPAN, The O’Reilly Factor, Oprah, and Lou Dobbs Tonight. He has been a guest on radio programs, including The Laura Ingraham Show, National Public Radio, The Hugh Hewitt Show, and The Dennis Prager Show. He has been profiled extensively by The New York Times, The Washington Post, the Associated Press, The Washington Times, The Seattle Post-Intelligencer, The Arizona Republic, and National Catholic Register.