The Story of Harris Funeral Homes

NEWS ALERT: Supreme Court delivers a troubling decision against Tom Rost and Harris Funeral Homes. Read below to learn more about their story.

For more than 100 years, R.G. & G.R. Harris Funeral Homes has been ministering to grieving families in Michigan. Owned by Tom Rost, this family business has employed five generations of Tom's family. And it has quite a legacy.

Tom and his employees seek to serve their community with compassion. That’s why its policies, which include a sex-specific dress code, are crafted to ensure that families can focus on processing their loss and grief. And it’s that dress code that brought Tom all the way to United States Supreme Court. 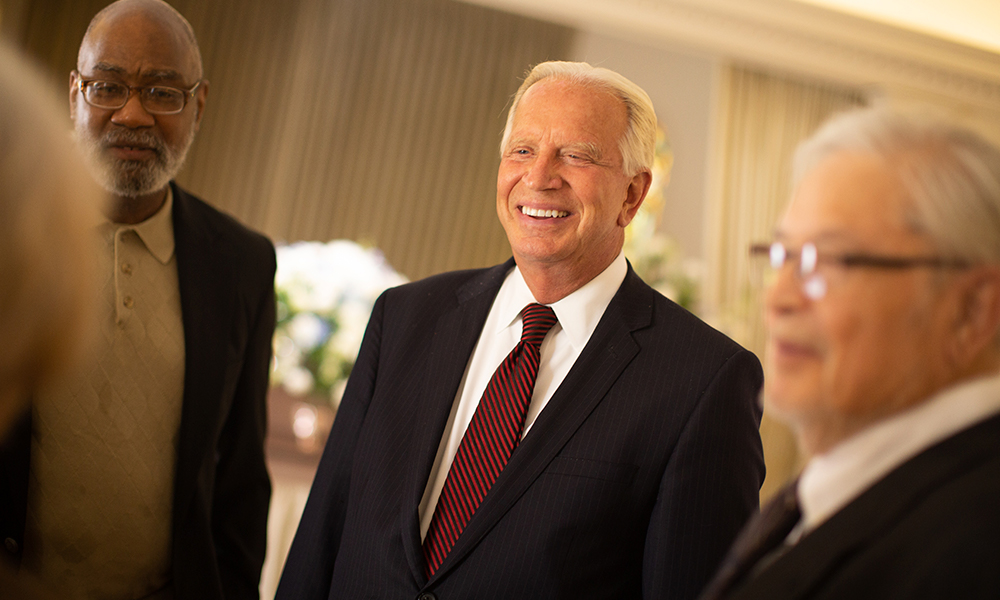 Harris Funeral Homes has received special recognition for its exemplary service, including being voted “best hometown funeral home” in the Detroit area.

In 2013, Tom was informed that one of his employees, a male funeral director who had agreed to, and followed, the company’s sex-specific dress code for six years, intended to start dressing and presenting as a woman while working with grieving families.

While that employee was free to dress however that employee wanted outside of work, Harris Funeral Homes expects its funeral directors to follow the dress code during working hours. After all, the dress code is a crucial component to how it serves grieving families. But the employee decided not to comply. After considering the needs of the funeral director, other employees, and the grieving families the funeral home serves, the funeral home felt it had no choice but to part ways with the employee.

This should have been an open-and-shut case. After all, Tom and Harris Funeral Homes were acting consistently with existing laws. Small businesses are allowed under the law to have sex-specific dress codes. Even the EEOC’s own employee manual states that a “dress code may require male employees to wear neckties at all times and female employees to wear skirts at all times.”

But the EEOC elevated politics above the interests of the grieving families that Tom and Harris Funeral Homes serve.

To advance its policy goals, the EEOC decided that the definition of “sex” in Title VII of the Civil Rights Act should be rewritten to include “gender identity.” But neither unelected bureaucrats nor courts have the authority to rewrite federal law. That’s a blatant and unconstitutional overreach. In America, Congress makes law. It says so in our Constitution. That power does not belong to unelected officials.

That’s why Tom asked the U.S. Supreme Court to hear his case and uphold his freedom. No one should be punished for acting consistently with existing laws.

In a troubling decision, the Supreme Court ruled against Harris Funeral Homes. Now, other unelected officials and courts may feel empowered to rewrite other statutes—forcing Americans to guess what the law means—including something as fundamental as the meaning of “sex.”

Please make your tax-deductible gift right now to help challenge the damaging effects this decision will have on your brothers and sisters in Christ!

“Sex” and “gender identity” are not the same

“Sex” defines whether someone is male or female as an objective fact based on biology. But “gender identity” is a fluid, difficult-to-define concept based on subjective perceptions.

Replacing “sex” with “gender identity” in Title VII should not be taken lightly. Only Congress has the authority to make such a drastic shift. And make no mistake about it: a change like this has consequences for everyone.

“Redefining ‘sex’ to mean ‘gender identity’ could create chaos and enormous unfairness for women and girls in athletics, women’s shelters, and many other contexts.”

These are important issues that you have the right to decide through your elected officials. Unelected officials—whether bureaucrats or judges—should not have the power to make these choices for us.

That’s why the U.S. Supreme Court’s decision is so troubling—for Tom and for us all. Businesses should have the right to rely on what the law is—not what government agencies want it to be.

This case is the perfect example of why we must continue to stand up when our freedoms are threatened—and when those in power abuse their positions to punish people who are willing to stand for faith and freedom.

Already a group of generous Ministry Friends has provided a $2 million challenge grant to help defend people like Tom. That means your gift today will help further the impact for freedom during this critical time.

Rise to the challenge and stand for freedom

While Tom and his family didn’t get the victory they hoped for, we know that God is in control. And we’re praying that He will move in the hearts of people like you to see what is at stake and commit to the battle for freedom.

The U.S. Supreme Court’s decision encourages activists to ask unelected bureaucrats and judges to rewrite other laws and that could impact every American—including you and your family.

Alliance Defending Freedom needs the resources to present a strong legal defense for people like Tom. This crucial work to defend freedom can only happen through God’s provision and your support.

This is not the time for us to lay low and sit on the sidelines. We must stand together.

You can make your tax-deductible gift right now to ensure that faith and freedom always have a strong legal defense. And when you do, your gift will further the impact of a $2 million challenge grant.

Please rise to the challenge today.

Together, and with God’s help, we can protect freedom in America.