It has been said that difficult circumstances don’t create character but reveal it.

That is certainly true of Jack Denton, a graduate of Florida State University.

After privately expressing his Catholic beliefs in a Catholic group chat during his senior year at FSU, Jack was subjected to a seven-hour Zoom call where fellow students called his Catholic views “a cult mindset” and “vile” and called for him to be removed from his position as president of the Student Senate.

“We spent seven hours listening to about 100 students calling for my removal as Student Senate President,” Jack said. “Every organization on campus, just about, published a message condemning me for expressing my Catholic faith.”

But despite the vitriol directed toward him, Jack treated every person involved with dignity and respect from the very beginning. Not only that, but Jack stood by his words—an expression of his Catholic faith—despite enormous pressure.

And that stand ultimately paid off.

Read more about Jack’s story below.

Who is Jack Denton?

In 2020, Jack Denton was a rising senior at Florida State University studying political science. On top of his coursework, Jack was involved in the Catholic Student Union and had been involved in the FSU Student Senate for three years. In the fall of 2019, Jack had been elected president of the Student Senate.

But after eight months of service, he was forced out of his position. What happened?

When school went online due to the COVID-19 pandemic in March 2020, Jack and other members of the Catholic Student Union turned to a group chat to stay in touch and share prayer requests.

One day, a student sent a video to the private group chat. Because the video would generate funds for BlackLivesMatter.com, the ACLU, and Reclaim the Block—organizations that hold explicitly anti-Catholic views—Jack knew he needed to speak up.

Because Jack’s faith is important to him—and because he is a kind-hearted and decent person—he had to make sure his friends in the group chat knew what they might be supporting. 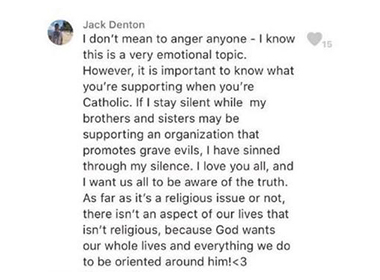 As you can see, Jack expressed no ill will or malice. He simply expressed his beliefs lovingly to his friends in private.

In a speech-loving culture, this would not be an issue. But unfortunately, our culture is quickly souring on speech. We live in the time of the cancel culture mob.

Someone in the private group chat shared a screenshot of Jack’s words with members of the Student Senate. Then, student senators took Jack’s messages out of context and shared them online, calling Jack “transphobic” and “racist.”

When members of the Student Senate initially held a vote to remove Jack from his position, they didn’t achieve the votes needed to do so. But it didn’t end there.

Two days later, the student senators held a seven-hour Zoom call where many students berated Jack, calling him terrible names and accusing him of bigotry. Jack sat and politely listened to all of it.

Then the Student Senate held another vote. This time, Jack was removed from his position as president.

But here’s the problem: FSU is a public university. That means every aspect of the university, including the Student Senate, is bound by the Constitution—and in particular, the First Amendment’s guarantee of free speech and religious freedom.

Jack Denton was removed from his position because he expressed his religious beliefs. That’s a clear violation of the First Amendment. So, with the help of attorneys from Alliance Defending Freedom, Jack challenged this unconstitutional action.

Students don’t give up their First Amendment rights when they enter a public university. All Jack did was share widely known Catholic beliefs with other Catholic students in a private group chat. The First Amendment protects his right to express his religious beliefs.

Unfortunately, many college campuses have become places where freedom of speech is not protected and students like Jack pay the price.

All students should be able to peacefully share their views with their peers without fear of punishment or retaliation. No one should be forced to silence their beliefs just to keep a job.

Hear Jack Denton’s story in his own words: