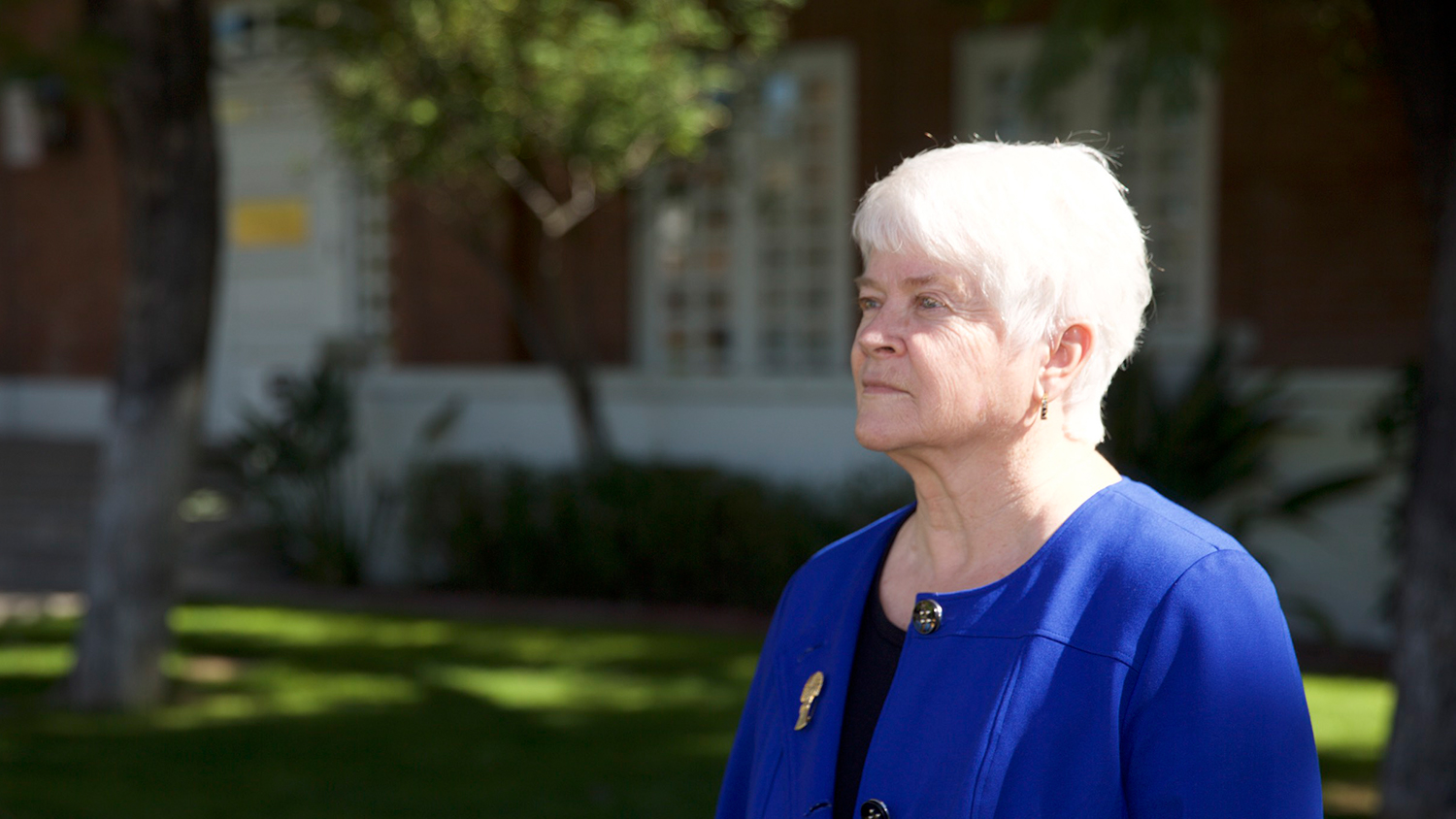 Last time, we celebrated many of the key victories that ADF secured for religious liberty and free speech in 2018. As 2019 dawns, what about those who still risk losing everything?

A familiar face, Jack Phillips was forced back into court by the state of Colorado just weeks after the U.S. Supreme Court ruled that the same government agency had violated his constitutional rights by treating him with hostility—and depriving him of equal treatment—because of his religious beliefs.

On June 26, 2017, the same day that the Supreme Court agreed to take up Masterpiece Cakeshop v. Colorado Civil Rights Commission, an attorney requested a custom cake designed pink on the inside and blue on the outside to celebrate a gender transition from male to female.

Jack serves all customers; he simply declines to create custom cakes that express messages or celebrate events in violation with his deeply held beliefs. Jack declined this particular request because the cake would have expressed messages about sex and gender identity that conflict with his religious beliefs. Less than a month after the Supreme Court ruled for Phillips in his first case, the state surprised him by announcing its view that Colorado law requires him to create the requested gender-transition cake.

Not only that, Jack’s chances of a fair shake this time around seem far-fetched despite his win at the high court, because one member of the Civil Rights Commission has publicly maligned Jack as a “hater” on social media.


Sued for Every Penny

Like Jack, Barronelle Stutzman is facing a lawsuit from her state after she declined to create custom floral arrangements to celebrate the same-sex wedding of a long-time customer. Unlike Jack, Barronelle is also facing an ACLU lawsuit suing her for everything she owns.

Owner of Arlene’s Flowers in Washington state, Barronelle served Rob Ingersoll for nearly 10 years before telling him in 2013 that although she cares about him deeply, she could not in good conscience create floral arrangements celebrating his same-sex wedding.

Barronelle referred Rob to three local floral artists that she knew would do a good job. Then they discussed the ceremony, they hugged, and Rob left.

Acting without a complaint from Rob, Washington Attorney General Bob Ferguson began targeting Barronelle for prosecution. Using unprecedented measures, he not only went after her business, but also sued her in her personal capacity as well. Rather than respecting her right to peacefully live out her faith, the government has targeted her because of her beliefs.

Worse, the state has applied its laws unevenly, choosing not to punish a coffee shop owner who profanely berated and expelled customers because of their Christian beliefs.

If Barronelle loses her case, she is at risk of losing everything—her business, her home, and every penny she’s saved.

In Masterpiece, the Supreme Court made it clear that government hostility toward people of faith has no place in our society. In light of the Court’s ruling in Masterpiece, it sent Barronelle’s case back to the Washington Supreme Court, where ADF will continue to defend her in 2019.


The Painter’s Brush, The Artist’s Pen

Joanna Duka and Breanna Koski co-own a Phoenix art studio called Brush & Nib Studio, which specializes in hand-painting, hand-lettering, and calligraphy. Brush & Nib is challenging a city ordinance that, as Phoenix interprets it, forces the studio’s owners to use their artistic talents to create artwork celebrating same-sex marriage.

The ordinance also forbids them from publicly expressing that they can only create artwork consistent with their Christian beliefs about marriage. . The law threatens up to six months in jail, $2,500 in fines, and three years of probation for each day that there is a violation.

In a June ruling, the Arizona Court of Appeals struck down part of the ordinance that forbids Joanna and Breanna from discussing their religious beliefs about marriage. But the court upheld other parts of the ordinance, which allow the city to override Joanna and Breanna’s artistic and religious decisions about what messages to convey through their hand-painted and hand-lettered artwork.

The Arizona Supreme Court will hear the case on January 22nd.


More Than a Story

Carl and Angel Larsen own Telescope Media Group, a Minnesota-based video production company that exists to tell great stories that honor God. The Larsens work with all people; they just don’t make films promoting all messages.

The Larsens want to use their God-given talents and the storytelling power of film to promote their religious beliefs about marriage. But according to Minnesota officials, the state’s Human Rights Act mandates that if the Larsens create films celebrating marriage between one man and one woman, they must also create films celebrating marriages that violate their beliefs, including same-sex marriages.

The State is preventing the Larsens from creating the marriage films that they are passionate about by imposing steep fines and 90 days in jail if they follow their consciences.

In October, ADF argued the Larsens’ case before the U.S. Court of Appeals for the 8th Circuit, and they expect a decision in 2019.

Since 1910, R.G. & G.R. Harris Funeral Homes has ministered to grieving families in the Detroit area. Employees of the small, family-owned business work hand in hand with those suffering the loss of a loved one, following policies designed to meet the needs of the families they serve.

In 2007, this multi-chapel funeral home hired a male employee who agreed to comply with those policies, including the company’s sex-specific dress code, which is crafted to emphasize professionalism and keep the focus on families mourning the loss of a loved one. But in 2013, the employee notified funeral home owner, Tom Rost, of an intent to dress as woman at work, even when interacting with the bereaved, in violation of the company’s dress code.

Tom determined that allowing this would not be in the best interests of his clients processing their profound loss. He offered the employee a severance package, which the employee refused. The Equal Employment Opportunity Commission then targeted the funeral home for prosecution, seeking to harass Tom in order to bring about its own political goal of replacing “sex” in Title VII of the Civil Rights Act of 1964 with “gender identity.”

Title VII is the federal law intended to ensure equal opportunities in employment, regardless of a person’s race, color, religion, national origin, or sex. “Sex” and “gender identity” are not the same thing. “Sex” treats whether someone is male or female as an objective fact based in biology. In contrast, “gender identity” is a fluid, non-binary, and difficult-to-define concept that reduces maleness or femaleness to subjective perceptions.

The U.S. Court of Appeals for the 6th Circuit adopted the EEOC’s argument and rewrote Title VII according to the EEOC’s wishes. Now, ADF has appealed to the Supreme Court to review the 6th Circuit’s ruling and affirm the clear definition of sex under Title VII.


We Have Already Won

It seems a little cliché to say this, but we know that no matter the outcome of all these cases, we already have victory through Christ. It is Christ who has enabled us to do this work. Without His guidance, it would be impossible to do the work that ADF does.

God has called us to this important work, and at the same time, He sends us His blessing and provision through the continued support of ADF ministry friends. The financial support that comes from many of you is vital to our existence, and we are beyond blessed to receive these gifts. Thank you for teaming up with us in defense of religious freedom.


Get the most important articles on religious freedom, life, and family delivered to your mailbox three times a week. Sign up for the Alliance Alert!

What Cancel Culture Is and Isn’t

The term "cancel culture" is applied to a variety of situations, some warranted, some not. So what is cancel culture, really?

Here’s What We Know about the Biden Administration & ‘Court Packing’

Let’s dive into the facts and the history surrounding “court packing” and the judicial branch.

Even SNL Knows Cancel Culture Is Out of Control

In a recent sketch, Saturday Night Live mocked cancel culture, poking fun at how ridiculous online mobs can be.