How far would you go to take a stand for your beliefs? What would you be willing to give up?

These are questions Washington floral artist Barronelle Stutzman had to answer beginning in 2013. That is when she declined to create custom floral arrangements celebrating the same-sex wedding of a friend and longtime customer because it conflicted with her religious beliefs. Barronelle ended up in a eight-year lawsuit and risked losing nearly everything she had built over a lifetime, including her business and her life savings.

But Barronelle was not easily intimidated. Her strong Christian faith gave her the strength she needed to stand up for her beliefs.

“You have to make a stand somewhere in your life on what you believe and what you don’t believe,” she said. “It was just a time I had to take a stand.”

Read the details of Barronelle’s case below. 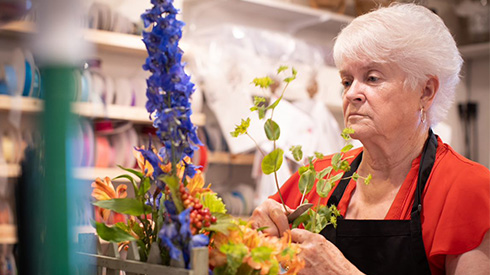 Who is Barronelle Stutzman of Arlene’s Flowers?

Barronelle is the last person you would have expected to be entangled in a lawsuit. She is an unassuming, sweet grandmother and floral artist. Barronelle lovingly served everyone in her community regardless of their race, sex, religion, or sexual orientation.

She happily served her friend and longtime customer Rob Ingersoll for nearly a decade. But when Rob asked her to create floral arrangements for his same-sex wedding, Barronelle knew that this was a custom design that she could not create. As a devout Christian, Barronelle believes that marriage is between one man and one woman. She could not use her talents to create floral art that celebrates a view of marriage contrary to this belief. Barronelle cares deeply for Rob. But after much thought and prayer, she made the decision to refer Rob to three nearby floral artists she trusted to do a good job.

Barronelle explained her decision to Rob, the two hugged, and he left her shop. It should have been over, but then the Attorney General of the State of Washington heard about Barronelle’s decision through media reports generated by a social media post and decided to make an example of her.

The Washington State Attorney General sued Barronelle, not just in her role as a business owner, but in her personal capacity as well.

The American Civil Liberties Union (ACLU) also filed a lawsuit against Barronelle, similarly naming her in her personal capacity. This means that if Barronelle had lost her cases, she could have lost nearly everything—not only the floral business that her mother started, but also her retirement savings.

Meanwhile, a coffee shop in Seattle expelled Christian customers and openly mocked their faith, but the Attorney General did nothing. There was clearly a double standard about which claims the state did and did not pursue.

Barronelle was targeted even though she served everyone. That’s why she continued to appeal her case.

People of goodwill should be able to disagree about important issues like the meaning of marriage. But the State of Washington targeted Barronelle because it disagreed with her personal beliefs. The State wanted to force Barronelle to use her artistic talents to express a message she disagreed with.

This is not a choice any American should have to make. The First Amendment exists to allow every individual to live according to their beliefs without fear of government punishment.

That’s why Barronelle stood strong in her fight against this unfair lawsuit brought by her state. After almost a decade in court, Barronelle was ready to retire and chose to settle her case and pass the legal torch to other creative professionals.

Barronelle ended her lawsuit never having violated her conscience.

Views about important issues like marriage may change. But the First Amendment’s enduring promise is that people of goodwill are free to live out their beliefs without government hostility or punishment. That is why you can support Barronelle’s freedom no matter what you believe about marriage.