Will You Fight For Your Freedoms?

Thanks for listening to
Townhall Review!

Your fundamental freedoms are under attack.

As you heard on the radio, more and more Americans just like you are finding that their freedoms are being eroded. Students are told that they cannot hand out the U.S. Constitution on their college campuses. Business owners are risking their livelihoods for simply living out their faith. And many others are forced to promote messages that conflict with their deeply held beliefs.

We provide our legal services completely free of charge to our clients! Your generous financial support makes it possible for Alliance Defending Freedom and its more than 4,400 Network Attorneys to protect and defend your freedom, and the freedom of your children and grandchildren by providing the resources necessary to fight pivotal court battles. Please consider making a financial contribution to defend freedom now. 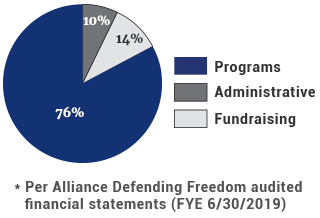