Since its passage, Title IX has opened opportunities in both academics and athletics for innumerable girls and women. Nearly forty years after Title IX was passed, over 190,000 women participate in college sports every year. Before that, fewer than 30,000 did.

But by ignoring the very real biological differences between men and women, a policy in Connecticut denies girls exactly what Title IX promised. It allows males who identify as female to compete in girls’ sports. But males have obvious physical advantages and have deprived girls in Connecticut repeatedly of championship titles and opportunities to advance to the next level of competition.

Thankfully, four female athletes are standing up to this unfair treatment. They’ve faced some setbacks, including a recent court decision dismissing their case. But they’re not backing down, and ADF appealed this ruling to ensure our laws and policies reflect biological reality. When they don’t, it’s girls and women who most often suffer the consequences.

Read more about the case below.

Selina Soule, Chelsea Mitchell, Alanna Smith, and Ashley Nicoletti are high-performing track and field athletes. All four have spent years and hundreds—if not thousands—of hours training for the chance to be the very best, to be recognized as champions, and even compete for college scholarships. 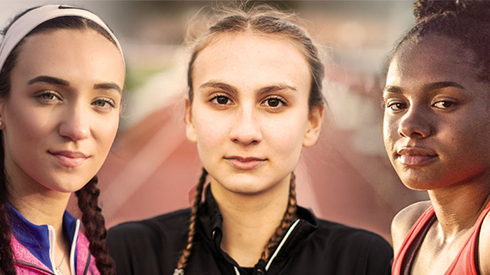 But the Connecticut Interscholastic Athletic Conference (CIAC) has been allowing males to compete in the female category. This threatens the opportunities for female athletes to earn titles and even scholarships.

Take Chelsea for example. Four times, Chelsea has been the fastest girl in a state championship race, yet been sent home without a gold medal because she was beaten by a male. She’s also lost two all-New England awards to male athletes. And she’s not alone.

In 2019, Selina finished just one place short of advancing to the final round of the Indoor Track and Field State Championships. Selina likely would’ve gone on to compete at regionals, but two males who identify as female competed against her, winning first and second place and setting state records. Instead of getting to compete in front of college scouts, Selina was relegated to the sidelines.

Alanna Smith also has a promising career ahead of her in Track and Field. In 2019, she won the 400-meter dash at the New England Regional Championships as a freshman. Later, however, Alanna came in third place to a male in the 200-meter dash, when she should have been recognized as runner-up. Alanna is a talented athlete, but if she is forced to continue competing against males, her opportunities will decrease.

Ultimately, the CIAC policy creates an unfair athletic environment and disadvantages for girls.

Title IX guarantees equal opportunity in girls’ sports. But the CIAC’s policy ignores the real physical differences between the sexes and makes it harder for girls to chase their athletic dreams. That’s why Alliance Defending Freedom filed a lawsuit challenging this policy: After all, our laws and policies should reflect the biological reality that men and women are different, not ignore it.

In taking a stand with Selina, Alanna, Chelsea, and Ashley, ADF is ensuring that this reality is recognized and that these female athletes can compete on a level playing field.

In 2020, ADF attorneys filed a lawsuit in federal court against the CIAC.

In March 2020, the U.S. Department of Justice filed a brief that supports ADF’s position in this case, stating: “Title IX and its implementing regulations prohibit discrimination solely ‘on the basis of sex,’ not on the basis of transgender status, and therefore neither require nor authorize CIAC’s transgender policy. To the contrary, CIAC’s construction of Title IX as requiring the participation of students on athletic teams that reflect their gender identity would turn the statute on its head.”

But earlier this year, under the new Biden administration, the Department of Education withdrew its support for these female athletes.

Unfortunately, that’s not the only setback Selina, Chelsea, Alanna, and Ashley have faced in their legal battle.

At the end of February, the ACLU argued that this case should be dismissed—and that these female athletes’ concern about fairness in women’s sports should be disregarded. Unfortunately, the court agreed.

But this is not the end of the road. Today, ADF appealed this mistaken ruling and will continue to stand up for Selina, Chelsea, Alanna, and Ashley in court.

The CIAC implemented this policy statewide, threatening equal opportunities for female athletes across the state.

Why: To protect fairness for girls and women

Biologically, men have many physical advantages over women, including a greater muscle mass, greater bone density, higher lung capacity, and larger hearts. Regardless of how they identify, the reality of men’s inherent physiological strength means that no matter how hard a girl trains, she cannot compete at the same level as a comparably fit male.

Unfortunately, Selina, Alanna, Chelsea, and Ashley aren’t the only girls in their state whose athletic opportunities have been unfairly taken away.

Since the CIAC adopted this policy, female athletes have repeatedly watched from the sidelines as males win medals and honors that otherwise would have been theirs. Now, males have taken 15 state titles that previously were held by nine different girls in Connecticut.

Men and women simply are biologically different—to ignore this fact in the arena of sports tips the whole playing field.

“Even before I get to the track, I already know that I’m not going to get first place, or maybe even second place,” Alanna says. “I know that no matter how hard I work, I won’t be able to have the top spot.” Selina, Chelsea, Alanna, and Ashley know that when they compete against males, the odds are stacked against them—and no amount of training can change that.

Within just three years, over 85 chances to compete in elite athletic competitions have been taken from girls across the state. Equality in women’s sports needs to be protected.