The day before Tanner Cross, a P.E. teacher at Leesburg Elementary in Virginia, was suspended was a typical day. He had played a game of T-ball with his students. Nothing was out of the ordinary.

That evening, someone from Human Resources called Tanner and asked to meet with him the next morning. When Tanner came to the meeting, he was immediately informed that he was being placed on administrative leave.

So, what had he done wrong? Two nights earlier, Tanner had attended a school board meeting in his personal capacity and voiced his opinion on a couple of proposed policies, just like many other parents and community members. The two policies that Tanner expressed concern over would require teachers to use a child’s preferred pronouns instead of the one that corresponds to their biological sex, in some cases without parental notification or consent.

Tanner has been an educator for 15 years and cares deeply for his students. And he could not stand by silently as the school board considered policies that would ultimately harm students and force teachers to say things that they don’t believe.

But Tanner’s school administration labeled his comments “disruptive.” Less than 48 hours after he shared his thoughts, Tanner was placed on administrative leave.

That’s why Tanner reached out to Alliance Defending Freedom, and we filed a lawsuit on his behalf, representing him in court last week.

As you can imagine, the school’s decision to punish Tanner for his constitutionally protected speech didn’t sit too well with the Loudoun County community.

Last Friday, after ADF attorneys represented Tanner in court, a crowd of more than 200 parents and community members rallied in Tanner’s support. 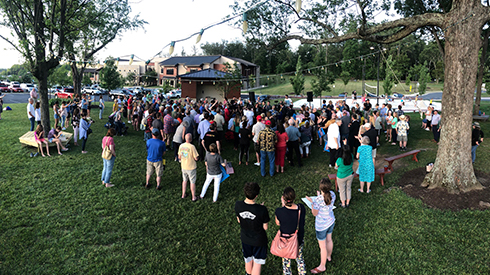 “Everyone’s rights come under threat if a school board can strip teachers like Tanner of their fundamental rights as American citizens and get away with it,” said ADF attorney Tyson Langhofer at the rally. “To preserve a free society for ourselves and our children, we must stand up for Tanner and all citizens who have the courage to express their views.”

Thankfully, Tanner’s stand in court did ultimately pay off. Today, the court ruled that Tanner’s constitutional rights were likely violated and ordered the school to reinstate Tanner while the lawsuit continues:

With this ruling, the court sent a clear message to the school board: “You are not above the law.”

Teachers have First Amendment rights to express their views along with everyone else, and Loudoun County Public Schools must respect that. In fact, as public officials, those on the school board have a duty to respect that.

“I expected more from a public school here in the United States, where our right to speak freely is protected under the First Amendment,” Tanner said at the rally.

As he should. We should all expect more of our elected government officials. Thankfully, the court held them to the standard the law requires.

Thank you for your ongoing support. Together, we can make a difference.