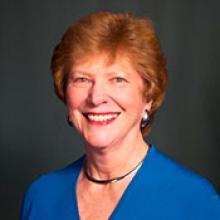 Terry Schlossberg served as executive director of Presbyterians Pro-Life for eighteen years and then as executive director and renewal advisor for the Presbyterian Coalition for another five years. She is past chairman of the board for the Institute on Religion and Democracy. She has been an ardent pro-life advocate for decades and has supported Alliance Defending Freedom in this area of litigation for years.

Prior to becoming a member of Alliance Defending Freedom Governing Board of Directors in 2010, Schlossberg worked to promote fidelity and chastity in church leadership by serving with the Presbyterian Coalition as coordinator for the Campaign to Defeat Amendment B, the attempt to remove language from the church's constitution requiring fidelity in marriage or chastity in singleness for church officers. Prior to that, she served as the Presbyterian Coalition’s executive director after nearly two decades as executive director of Presbyterian Pro-Life, Research, Education, and Care, Inc. Before beginning her career in the ministry, she was a secondary public school teacher and supervisor of special education programs for more than a decade.

Schlossberg has been long-established as a leader and authority on key religious and social issues. Her previous board service includes appointments with Presbyterian Action for Faith and Freedom, the Presbyterian Renewal Network, the National Pro-Life Religious Council, the Association for Church Renewal, The National Association of Evangelicals, and SEN—a mission organization based in Slovakia serving Eastern Europe. Schlossberg also served on the advisory board for Theology Matters, Presbyterians Pro-Life, and OneByOne. She co-authored Not My Own: Abortion and the Marks of the Church—which made the Christianity Today “Top 20 Books of the Year” list—and has had articles and materials on church reform published in First Things, Touchstone, Theology Matters, Presbyterian Layman, Presbyterian Pro-Life News, and various publications of the Presbyterian Coalition.

Schlossberg serves as an elder at National Presbyterian Church. She earned her M.A. at The George Washington University; received her B.A. from Bethel College in St. Paul, Minnesota; and attained certification as a supervisor of special education programs in the state of Pennsylvania.