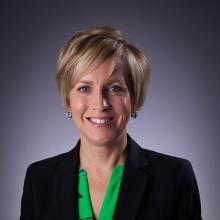 Rebecca Eggleston serves as chief of staff to the general counsel at Alliance Defending Freedom. She assists the general counsel with oversight of the U.S. Legal Division and Communications, which includes the Litigation, Legislative, Church and Ministry Alliance, Allied Legal Affairs, and Communications teams. She also directly oversees the Church and Ministry Alliance Team and Allied Legal Affairs Team. Eggleston previously served at ADF from 2015 to 2017 as the director of professional development for the Blackstone Legal Fellowship.

Prior to returning to ADF in 2020, Eggleston was section chief counsel for the Consumer Protection & Advocacy Section at the Arizona Attorney General’s Office, where she oversaw all consumer fraud, data privacy, and antitrust matters, including some of the state’s most high-profile litigation. She led a team that recovered record-breaking amounts of restitution for consumers. For her work at the Attorney General’s Office, the Arizona Capitol Times named her to a group of notable “Arizona Women Achievers” in 2019.

Before first joining ADF in 2015, Eggleston was a securities litigation associate at Paul Hastings LLP, where her practice focused on the representation of corporations and their officers and directors in the defense of private securities actions and regulatory proceedings. While at Paul Hastings, she was active in pro bono matters and served as amicus counsel in several of ADF’s religious liberty cases, including Town of Greece v. Galloway.

Eggleston received her J.D. with honors from the University of Michigan Law School in 2008.  She participated in the Blackstone Legal Fellowship Program in 2006. Prior to law school, she taught high school mathematics for four years.