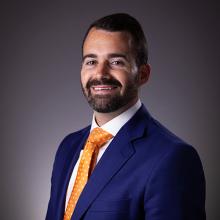 Paul Schmitt serves as legal counsel with Alliance Defending Freedom, where he is a member of the Center for Christian Ministries. Since joining ADF in 2019, Schmitt has advanced litigation efforts to maintain and defend the constitutionally protected freedom of churches, Christian ministries and religious schools.

Prior to joining ADF, Schmitt clerked for the Honorable Michael S. Kanne on the United States Court of Appeals for the Seventh Circuit and litigated as an associate attorney at Ice Miller LLP in Indianapolis. He also served as an officer in the United States Air Force for more than four years, working in military satellite communications.

Schmitt received his law degree magna cum laude from the University of Illinois College of Law in 2017. During law school, Paul externed with the Illinois Fourth District Appellate Court and the Vatican’s Pontifical Council for the Family. He also completed the ADF leadership development program to become a Blackstone Fellow. He received his Bachelor of the Arts from the University of Illinois at Urbana-Champaign in 2009, and served the Urbana Campus on the University’s Board of Trustees. Paul is admitted to the state bars of Illinois and Indiana, the U.S. Court of Appeals for the Seventh Circuit, and the Northern and Southern districts of Indiana.