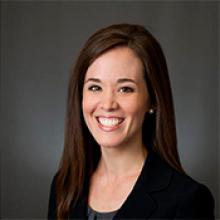 Christiana Holcomb serves as legal counsel for Alliance Defending Freedom, where she is a key member of the Center for Christian Ministries.

Since joining ADF in 2012, Holcomb has worked to defend the constitutionally protected freedom of churches, religious schools, and Christian ministries to exercise their faith without government interference. She has also advocated for the right of pastors and churches to be free from IRS censorship via the unconstitutional Johnson Amendment and has defended the bodily privacy rights of students.

Holcomb served as co-counsel in the first pre-enforcement challenges filed against state officials who threatened to censor churches and deny them their freedom to operate consistently with their beliefs about human sexuality: Fort Des Moines Church of Christ v. Jackson and Horizon Christian Fellowship v. Williamson. In both cases, state officials quickly reversed course.

Holcomb has testified before Congress and has likewise advocated successfully at the grassroots level. As an ADF commentator, she regularly speaks at conferences and other venues across the country. In addition, numerous media outlets have interviewed and frequently quoted her.

Holcomb earned her Juris Doctor in 2010 from Oak Brook College of Law and Government Policy, where she graduated first in her class and served as a teaching assistant in criminal law. Also in 2010, Holcomb completed the Alliance Defending Freedom leadership development program to become a Blackstone Fellow. She is admitted to the state bar of California, the District of Columbia, the U.S. Supreme Court, and numerous federal district and appellate courts.