Vanderbilt’s crack-down on religious groups has captured headlines and ignited controversy on campus.  Chancellor Zeppos’ recent “message” on “nondiscrimination” announced a town hall to explain everything.  At this meeting, the dean of the divinity school served as a religious stage prop while Provost Richard McCarty and General Counsel David G. Williams filled three hours with double-talk.

Both the complete footage and the highlights above expose Vanderbilt’s policy change for what it is:  a purge cloaked in a nondiscrimination guise that targets religious students who make the mistake of taking their faith and freedoms seriously.  And it is lead by people who do not understand the role of religion in students’ lives, who have little regard for basic freedoms, and who refuse to put their policy in writing.

For example, a student eloquently explained that just as it is impossible for religious students to separate their faith from the rest of life, so religious groups necessarily make faith-based decisions.  Provost McCarty replied, “Everyone isn’t as fortunate as you are to be firm in their faith.”  So what?  When students want to become stronger, whom do they seek?  People who are firm in their faith?  Or groups engaged in false advertising (e.g., Jewish groups run by Hindus, Mormon groups run by Baptists)?  Vanderbilt mandates the latter.  But this is not surprising, seeing how the Provost emphatically declared that his faith does not and should not affect his decisions at all.  That is, of course, his privilege.  It would be nice if he would allow others to choose differently.

Nor did the administrators fare any better at Freedom 101.  Mr. Williams announced that if a group does not accept everyone, it discriminates.  Actually, this is called freedom of association, which—as the Supreme Court has repeatedly declared—includes the freedom not to associate.  But then again, Mr. Williams has a strange view of this freedom, one that tells groups:  “Either you let everyone in, or you won’t exist.”  This may be many things, but free association it is not.

So what exactly is Vanderbilt’s new policy?  Well, no one knows—not even the administrators.  Mr. McCarty announced an “all-comers” policy.  But fraternities and sororities exclude people for all sorts of reasons, including sex.  Mr. Williams waffled on whether they would be exempted, but not on how this policy would apply to religious groups:  “What we’re against is you basically saying, ‘The only people who can run for leadership—or the only people who we will establish as leaders—have to share that belief.’”  Despite the overall fog of Vanderbilt’s “fire, ready, aim” approach to creating policy, one thing is clear:  religious groups will not enjoy the freedom of religious association.

This shifting double-standard irritated students, who repeatedly asked for a written policy.  But this was too much to ask of Provost McCarty, who explained that “it is virtually impossible to put down in a single document all of the permutation that we have talked about tonight in one tightly written policy.”  Somehow, the thousands of universities that dot the American landscape from sea to shining sea have all managed to create such a written policy.  For that matter, the countless elementary, middle, and high schools have too.  But it is too daunting a task for Vanderbilt.  In fairness, though, it is difficult to concoct a policy that protects favored groups (like the Greek system), targets Christians, and also appears even-handed.

However, to the Provost, all of this is much ado about nothing.  After all, as he announced to the students:  “You’re saying to me, ‘I’m making you do something that you don’t want to do.’  And I am telling that’s not what I am asking you to do.”  Really?  Then why change the policy?  Such obfuscation cannot conceal the reality.  Vanderbilt demands that Christian groups consider Jewish leaders, that Jewish groups consider Hindu leaders, etc. (thus exposing them to discrimination complaints if such students get voted down).  Students rightfully object to this violation of religious freedom.  And the University says, “Do it anyway, or go away.”

Regardless, the Provost assured students that he saw no danger that a group would be “subverted by a couple of dedicated individuals that want to somehow divert the group from its original intent.”  Mr. Provost, meet Christian Legal Society.  It exists, among other things, to hold Bible studies.  But when it said that it expected its leaders to lead these studies, “a group of dedicated individuals”—all on Vanderbilt’s payroll—“diverted the group from its original intent” by denying CLS the recognition it needs to meet freely on campus.

Fortunately, Provost McCarty accentuated his absurdity with his solution for students serious about their beliefs and their freedoms:  “We’re asking you—oh, my gosh—to take a leap of faith for one year and give it a try.”  Christians, of all people, exercise faith, but it is in the Rock of Ages, not in an administrator who articulates such a vacillating, incoherent, and dangerously unwritten policy. 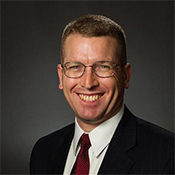