Can Unelected Officials Rewrite Federal Law? This Supreme Court Case Will Tell Us

Day in and day out, he gets to be there for people who are going through one of the most difficult situations in their life—the loss of a loved one.

And at R.G. & G.R. Harris Funeral Homes, Tom wants to make sure that he gets everything exactly right for them. He and his staff meticulously plan every detail so that the families and friends they serve can focus on the grieving process.

Tom never imagined that this care and attention to detail would land him at the U.S. Supreme Court. Let’s take a look at this case and the man behind Harris Funeral Homes. 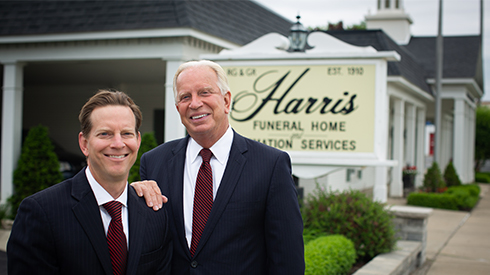 Harris Funeral Homes has been in Tom’s family for over 100 years. But he didn’t always want to carry on the family tradition of serving grieving families.

In fact, Tom dreamed of one day being the president of General Motors.

But God had other plans.

Tom worked with his dad and uncle at Harris Funeral Homes when he was home for the summer during college. And his passions started to shift. Eventually, he decided to attend mortuary school.

Tom has now owned Harris Funeral Homes for over 35 years, and he runs it alongside his son—making it a fifth-generation family business.

Harris Funeral Homes recognize that its highest priority is to honor God in all that we do as a company and as individuals. With respect, dignity, and personal attention, our team of caring professionals strive to exceed expectations, offering options and assistance designed to facilitate healing and wholeness in serving the personal needs of family and friends as they experience a loss of life.

To that end, Tom does everything necessary to make sure the people that Harris Funeral Homes serves feel welcome. He sweeps the floors, plants flowers, shovels snow, and changes lightbulbs. Many times he will be the one to open the door and greet you with a smile as you walk into the funeral home.

Tom also follows up with each customer, calling to ask how they are doing and if he can help them in any way. And he really means it. At one point, a widow confided in Tom that she had no way to get to the grocery store. Tom promptly sent one of his employees to buy her groceries.

Tom is also continually looking for ways to improve the business and provide the best service possible. This includes everything from the smallest details, such as leaving a rose when a body is removed, to offering a grief counseling program for those who need it. Harris Funeral Homes also hosts an angel tree service every Christmas to honor those who died in the past year—which many families attend.

This level of service is what sets Harris Funeral Homes apart.

In 2011, Harris Funeral Homes was recognized by Preferred Funeral Directors International with the Parker Award for exemplary service. And in 2016, the Harris location in Livonia, Michigan was recognized as the best hometown funeral home in the local newspaper.

Because Tom wants to ensure that the families and friends of a deceased loved one can focus on processing their grief rather than on the funeral home and its employees, he asks each of his employees to agree to a code of conduct and sex-specific dress code.

But it’s the dress code that has taken Tom all the way to the U.S. Supreme Court.

The funeral home hired a male funeral director who agreed to follow the sex-specific dress code at the time of hiring. But in 2013, nearly six years after being hired, that employee announced an intent to start dressing and presenting as a woman while working with grieving families. After carefully considering the needs of the funeral director, other employees, and his clients, Tom couldn’t agree to that. So a government agency, the Equal Employment Opportunity Commission (EEOC), sued him for sex discrimination.

Alliance Defending Freedom (ADF) has been representing Tom and Harris Funeral Homes in court ever since.

It shouldn’t have come to this. After all, Harris Funeral Homes acted in accord with existing laws, which allow small businesses to have sex-specific dress codes. But the EEOC decided to take the law into its own hands—by redefining “sex” to include “gender identity.”

This drastic change could have widespread consequences for everyone, threatening not only small business but also equal opportunities and the privacy and dignity of women and girls.

Those are just a few examples of many.

Thankfully, the federal government has since changed course and now supports Tom and the funeral home. But the ACLU continues the quest to redefine the meaning of “sex” in federal law.

In 2013, the former employee filed a complaint with the EEOC. In 2016, a federal court ruled in favor of Harris Funeral Homes, but the EEOC appealed the decision. Unfortunately, in 2018, the U.S. Court of Appeals for the Sixth Circuit reversed that decision, ruling against Harris Funeral Homes.

In 2018, ADF asked the U.S. Supreme Court to hear this case, which it agreed to do. The Supreme Court heard oral arguments on October 8, 2019. And we are now awaiting a decision from the Court.

Why: Employers should be able to rely on what the law says, not what unelected officials want it to say.

Businesses have the right to rely on what the law is—not what government agencies want it to be—when they create and enforce employment policies.

Only Congress has the authority to change the law. Unelected officials—whether bureaucrats or judges—don’t have the power. We are asking the U.S. Supreme Court to make this clear.

Neither government agencies nor the courts have authority to rewrite federal law by replacing “sex” with “gender identity”—a change with widespread consequences for everyone.