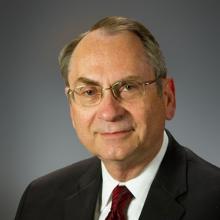 Michael Whitehead has over 40 years of experience as a Kansas City trial attorney defending churches and ministries from trial courts to the U.S. Supreme Court.

In 1981, Mike was co-counsel in a landmark case before the U.S. Supreme Court, Widmar v. Vincent, (454 US 263), establishing the right of Christian students to “equal access” to student union space for Bible study and prayer meetings at a public university. The Court ruled 8-1 in favor of Mike’s clients, the students.

This year, he was local counsel with his son, Jonathan, also an attorney, in Trinity Lutheran Church of Columbia, Mo. v. Comer, “the playground case.” On June 26, 2017, the U.S. Supreme Court ruled 7-2 in favor of Mike’s client, the church.

In addition to his legal career, Mike has worked on the staff of two Southern Baptist entities. In 1991, he became general counsel for the Southern Baptist Ethics and Religious Liberty Commission in its Washington, DC office. There he testified before Congress, met with the White House, and filed amicus curiae briefs in the Supreme Court on Southern Baptist views of family, faith and religious freedom. In 1995-2001, he was executive vice president and interim president of Midwestern Baptist Seminary in Kansas City, also teaching courses as associate professor of church and law.

Mike grew up in Independence, Missouri and graduated from Missouri University, both undergrad and law school. After law school, he served three years as a Captain in the U.S. Army Judge Advocate General’s Corps, (JAG) before entering private law practice in what is today called The Whitehead Law Firm, LLC. Mike and his wife, Jan, have three children and nine grandchildren and make their home in Lee’s Summit, MO. Mike has been ordained both as a deacon and as a minister of the gospel by Southern Baptist churches and currently attends Fellowship of Greenwood with Pastor Chris Williams.

In addition to serving on the Alliance Defending Freedom Governing Board of Directors, Mike serves as chairman of the ADF Foundation.