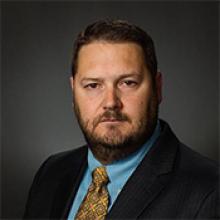 Ken Connelly serves as senior counsel with Alliance Defending Freedom, where he plays a key role with the Center for Life. His primary focus is ensuring that medical and allied health practitioners can deliver professional and compassionate care without violating their deeply held personal beliefs.

Since joining ADF in 2012, Connelly has represented medical, business, and government clients in cases implicating the constitutionally protected right to free speech, freedom of association, free exercise of religion, and freedom of conscience. In Hands On Originals v. Lexington-Fayette Urban County Human Rights Commission, he helped defend the freedom of a Kentucky promotional printer to decline to create apparel expressing messages that conflict with his faith. In Neely v. Wyoming Commission on Judicial Conduct and Ethics, he helped defend a judge facing removal from office because she told an inquiring reporter that her faith prevented her from performing same-sex marriages, which are discretionary under state law. In addition, in Cochran v. City of Atlanta, he helped represent Fire Chief Kelvin Cochran, who was suspended and terminated for writing a book, on his personal time, expressing biblical beliefs about marriage and sexuality.