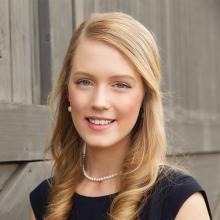 Ellie Wittman graduated magna cum laude from Miami University (Ohio) with a Bachelor of Science in Marketing in May 2020. Ellie previously interned at the Heritage Foundation in media relations and for Rep. Kevin McCarthy on his campaign finance team. While in college, Ellie was President of Students for Life on her campus where she led her group in their initiatives to support pregnant and parenting students, spread awareness on the issue of abortion, and engage in public policy. With the help of Alliance Defending Freedom, Ellie successfully defended her Students for Life group’s First Amendment rights when her administration attempted to condition the group’s speech by requiring the group to issue “trigger warnings.” Ellie has been a vocal advocate for the First Amendment and life issues across the country and has spoken alongside President Trump, as he signed an executive order regarding free expression on college campuses.

Ellie was born and raised in Cincinnati, Ohio. She grew up in a traditional Catholic home as the youngest of eight children.