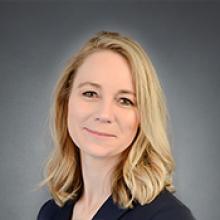 Erin Morrow Hawley serves as senior counsel to the appellate team at Alliance Defending Freedom. Before joining ADF, Hawley practiced appellate law at Kirkland and Ellis LLP, Bancroft LLP, and King & Spalding LLP, all in Washington, D.C. Hawley has litigated extensively before the U.S. Supreme Court as well as numerous federal courts of appeals and state courts of last resort. She also worked at the Department of Justice, serving as counsel to Attorney General Michael Mukasey.

As an academic, Hawley served as an associate professor of law at the University of Missouri where she taught constitutional litigation, federal income tax, tax policy, and agricultural law. She also taught constitutional law as a senior fellow at the Kinder Institute for Constitutional Democracy. Her scholarship focuses primarily on federal courts and has been published in numerous top journals.

Hawley is a frequent commentator on legal issues. Her work has been quoted or featured in the Washington Post, US News, USA Today, Fox News, the Washington Examiner, the Legal Times, and the Hill, among others. Hawley has also written a book on motherhood, entitled “Living Beloved: Lessons From My Little Ones About the Heart of God.”

Hawley is a former law clerk to U.S. Supreme Court Chief Justice John G. Roberts and Judge J. Harvie Wilkinson of the U.S. Court of Appeals for the Fourth Circuit. Hawley received her bachelor’s degree in Animal Science from Texas A&M University and her law degree from Yale Law School where she served as a Coker Fellow in Constitutional Law and on the Yale Law Journal. Hawley is an active member of the Missouri and District of Columbia bars and is admitted to practice before the U.S. Supreme Court and various federal courts of appeals.