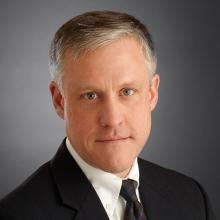 Roger G. Brooks serves as senior counsel with Alliance Defending Freedom, where he is a key member of the Center for Conscience Initiatives.

Brooks focuses his efforts on protecting freedom of speech, free exercise of religion, student privacy, and parental rights. Prior to joining ADF in 2018, Brooks worked with the New York law firm of Cravath, Swaine & Moore for 25 years, 19 of those as a partner in the litigation department. In 2017, he took early retirement from Cravath in order to devote his energies to advancing religious liberty and free speech.

Brooks received an A.B. from Princeton University in 1984, followed by a master’s degree in history and a Juris Doctor from the University of Virginia in 1987. At UVA, he served as an articles editor on the law review. After law school, Brooks clerked with the Hon. John D. Butzner, Jr., of the U.S. Court of Appeals for the 4th Circuit. In 1995, he received his Master of Divinity from Regent College Seminary in Vancouver, British Columbia. Brooks is a member of the state bars of New York and North Carolina. He served on the board of ADF from 2012 through 2014 and on the board of the Christian Legal Society from 2002 through 2011.