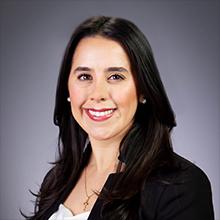 Erica Steinmiller-Perdomo serves as legal counsel for the Center for Christian Ministries at Alliance Defending Freedom.

Before joining ADF, Steinmiller-Perdomo clerked for Justice Jorge Labarga on the Florida Supreme Court and for Judge Monica Gordo on Florida’s Third District Court of Appeals. She also served as a prosecutor in the Miami-Dade County State Attorney’s Office where she tried more than a dozen cases ranging from misdemeanor domestic violence charges to third-degree felonies.

Steinmiller-Perdomo earned a Juris Doctor in 2015 from the Florida State University College of Law. She was the managing editor of the Law Review and a founding member of the FSU Student Chapter of the Cuban American Bar Association. Steinmiller-Perdomo authored two articles that are published in the FSU Law Review.

Steinmiller-Perdomo graduated from the University of Miami in 2012 with a double major in public relations and international studies as well as a minor in Spanish. She is a member of the Iron Arrow Honor Society.

Steinmiller-Perdomo is admitted to practice law in the state of Florida.