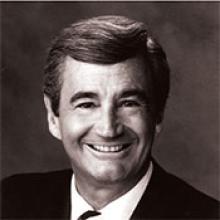 Through Coral Ridge Ministries, Dr. D. James Kennedy became the most listened-to Presbyterian minister in the world. His broadcast messages were televised from the nearly 10,000-member Coral Ridge Presbyterian Church in Fort Lauderdale, Florida, to 40,000 cities and towns across the United States and to nearly 200 nations.

"At last an organization capable of confronting the ACLU and winning the battles is on the field. We are very thrilled to have had a part in their formation." The late Dr. D. James Kennedy