Choosing a doctor is about more than just location and convenience. Many people want to find a provider who shares their beliefs, who will take time to understand their situation, and who will consider not just their physical health, but their emotional and even spiritual needs, as well.

For many Michigan residents, Christian Healthcare Centers fits the bill.

Based in the western part of the state, Christian Healthcare is a faith-based organization that focuses on serving the community, including those who cannot afford medical care.

But now, thanks to a Michigan state law and a pair of recent court rulings, Christian Healthcare’s ability to operate as a faith-based medical organization is in jeopardy.

Read more about this case below.

Who is Christian Healthcare Centers?

At Christian Healthcare, the focus is always on the patients. Doctors there regularly spend over half an hour with patients during appointments—double the time of the average consultation in traditional practices.

The ministry serves everyone regardless of characteristics like sexual orientation and gender identity. In fact, some of Christian Healthcare’s patients identify as transgender.

But while Christian Healthcare offers care to anyone, it cannot speak or provide treatment that conflicts with its religious beliefs to anyone.

That means Christian Healthcare cannot prescribe cross-sex hormones to facilitate efforts to change someone’s sex, and it cannot refer to patients using pronouns that do not match their biological sex. To do so would be to violate its belief that God made human beings male and female.

Christian Healthcare also requires its employees to affirm and abide by its religious beliefs—a standard practice among religious ministries that is permitted by federal law and in almost every state across the country.

And those facts—Christian Healthcare’s beliefs, its expression, and its hiring practices—are what put it at odds with the state of Michigan. 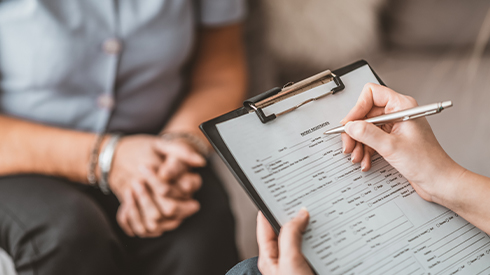 The civil-rights law in the state of Michigan prohibits discrimination because of sex—a standard stipulation that should not be controversial. But in 2018, the Michigan Civil Rights Commission reinterpreted “sex” to include sexual orientation and gender identity.

In the years following, two state court rulings affirmed the commission’s redefining of sex. In 2020, a state court held that “sex” includes gender identity but not sexual orientation. And in July 2022, the Michigan Supreme Court expanded the definition further, ruling that “discrimination on the basis of sexual orientation necessarily involves discrimination because of sex.”

When Christian Healthcare began to learn about these court decisions, it realized that its ability to serve the community and partner with fellow Christians consistent with its religious beliefs about biology and other topics would be threatened.

That may sound abstract, but the implications are concrete: Christian Healthcare in the near future needs to hire those who agree with its mission. And it needs to begin publicizing its job openings and explaining its policies. It needs to know how it can speak and address its patients and the public in a way that doesn’t contradict its core religious convictions. And it needs to be able to operate without worrying about investigations, prosecutions, and steep penalties.

But it cannot do any of these things because of current state law.

That’s why ADF attorneys have filed a lawsuit against Michigan Attorney General Dana Nessel on behalf of Christian Healthcare.

Christian Healthcare is seeking to protect its right—and that of other religious organizations—to serve the community and operate as a religious ministry.

Michigan’s civil-rights law, as defined by the Civil Rights Commission, threaten some of Christian Healthcare’s most fundamental rights. The First Amendment protects the right of religious ministries like Christian Healthcare to operate according to their beliefs, and to join with others of the same faith to achieve the ministry’s mission.

Michigan law could subject Christian Healthcare to steep penalties, including fines of $50,000, loss of medical license, and even possible jail time for employees.

Ministries like Christian Healthcare should not have to choose between helping the hurting and following their faith.

Simply put: Christian Healthcare’s religious freedom and freedom of speech are at stake.

Religious organizations should be free to operate and serve the community according to their beliefs.