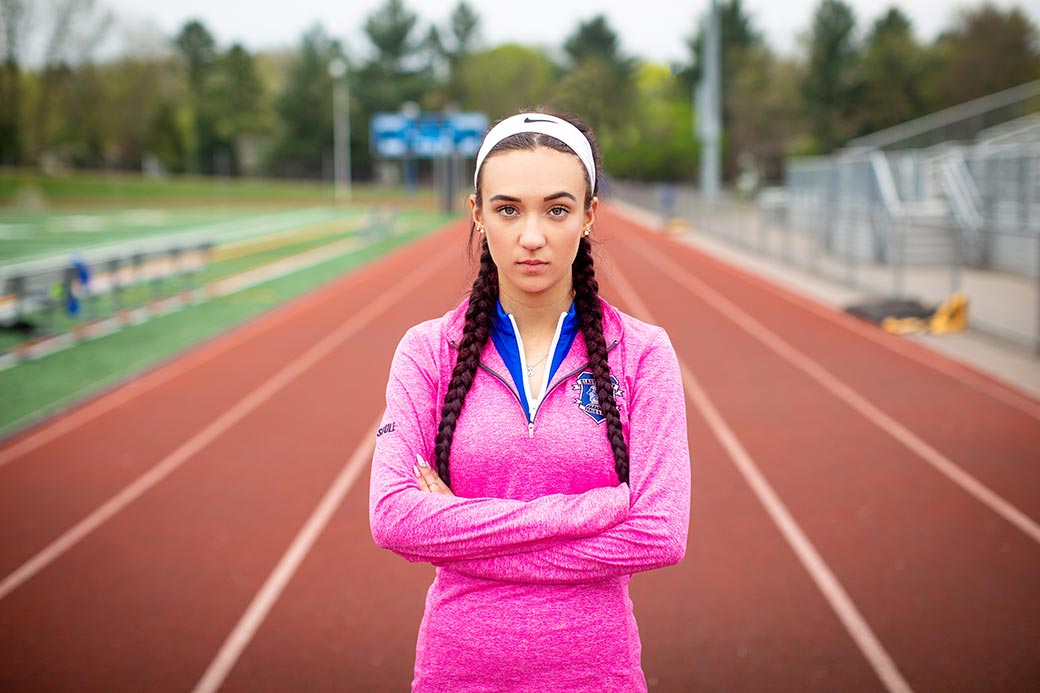 Yes. You heard that right.

Two male athletes who identify as female have won 15 women’s high school track championships that were once held by nine different girls in the state of Connecticut. Young women are losing athletic opportunities, dreams of competing at the next level, and even potential scholarships.

Thankfully, female athletes like Selina Soule, Chelsea Mitchell, and Alanna Smith are taking a public stand against the harmful policies that allow this to happen.

Edged out by males competing as girls 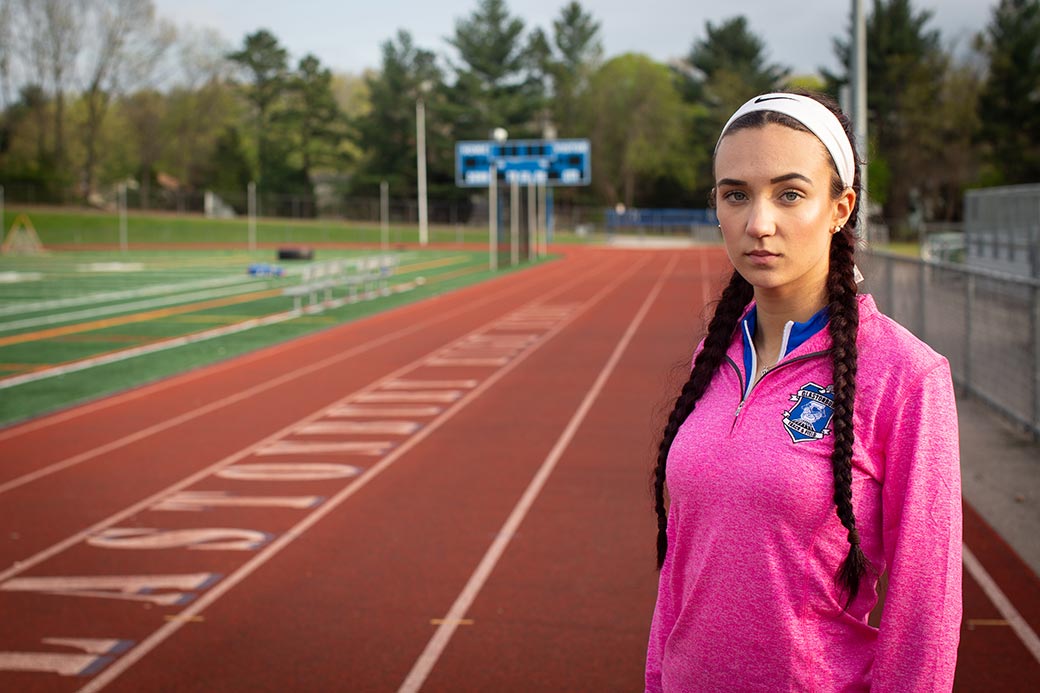 Connecticut high school runner Selina Soule lost the opportunity to compete for a spot in the New England Regional Championships because two biological males who identify as female competed in her event.

At the 2019 Connecticut Indoor Track & Field State Championships, Selina finished one place away from qualifying for finals, and the opportunity to compete for a qualifying spot at the New England Regional Championships in the 55-meter dash. The first and second spots in the race were taken by two male athletes. This was a massive disappointment for Selina. It meant she had to sit on the sidelines instead of competing in front of college scouts!

But Selina wasn’t the only one impacted. 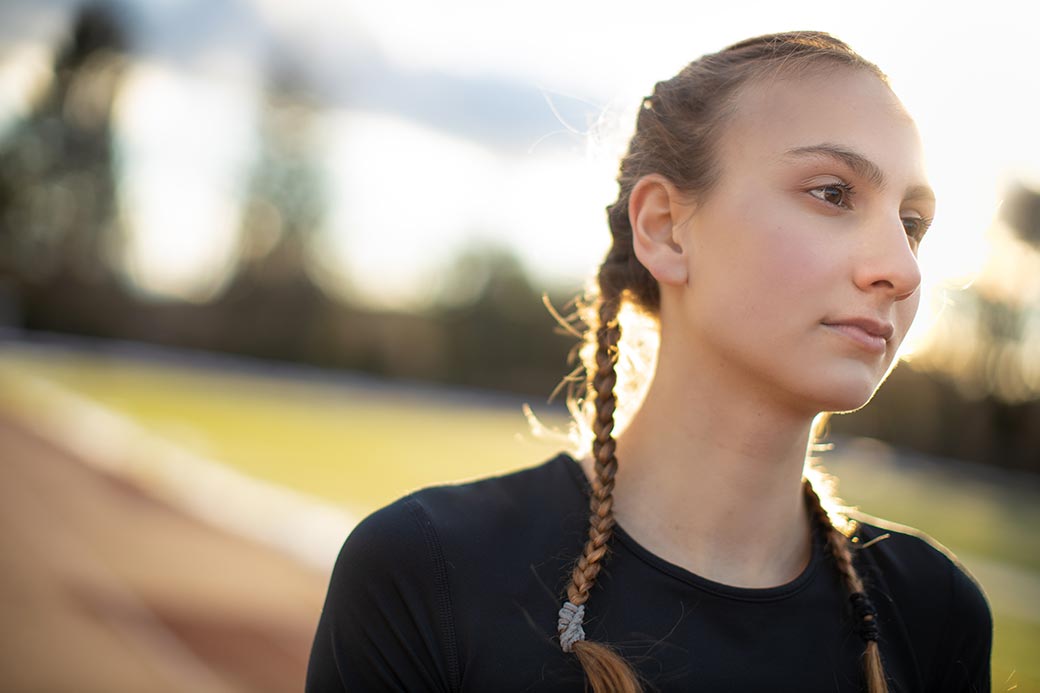 A talented high school sprinter, Chelsea Mitchell was pursuing her dreams. She was on the road to achieving state titles and awards as a female track and field athlete in Connecticut until the two males showed up at the starting line.

Because of their biological advantage, these male athletes began to win these accolades that rightfully belonged to Chelsea. Four times, she lost a state championship title to a male athlete. 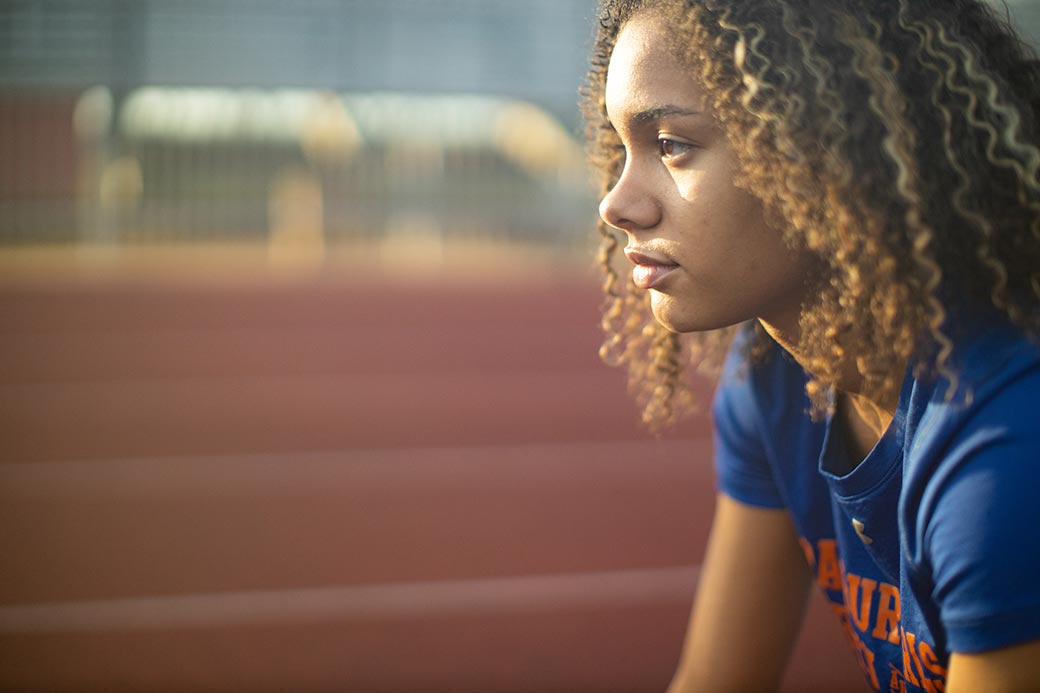 Alanna Smith is talented, and she trains hard. But in the end, she knows that will never be enough if she is forced to compete against males.

And then there’s Alanna Smith.

Alanna won the 400-meter dash at the 74th New England Interscholastic Track & Field Championships in June 2019 … as a freshman. She has a promising track career in front of her. Fortunately, no male athletes raced in the 400m dash at that meet—though a male athlete did compete in, and win, the 200m dash, bumping Alanna down to 3rd place. Alanna knows that being forced to compete against male athletes could threaten her opportunities to win championship titles and even earn scholarships.

That’s why Selina, Chelsea, and Alanna are taking a stand against policies that allow men to compete in women’s sports.

After first filing a complaint with the U.S. Department of Education, Selina, Chelsea, and Alanna filed a lawsuit against the Connecticut Interscholastic Athletic Conference (CIAC). The outcome of this case could impact young women nationwide.

Activists continue to oppose efforts to protect women’s sports at every turn. If they get their way, female athletes will soon end up on the sidelines of their own sports. 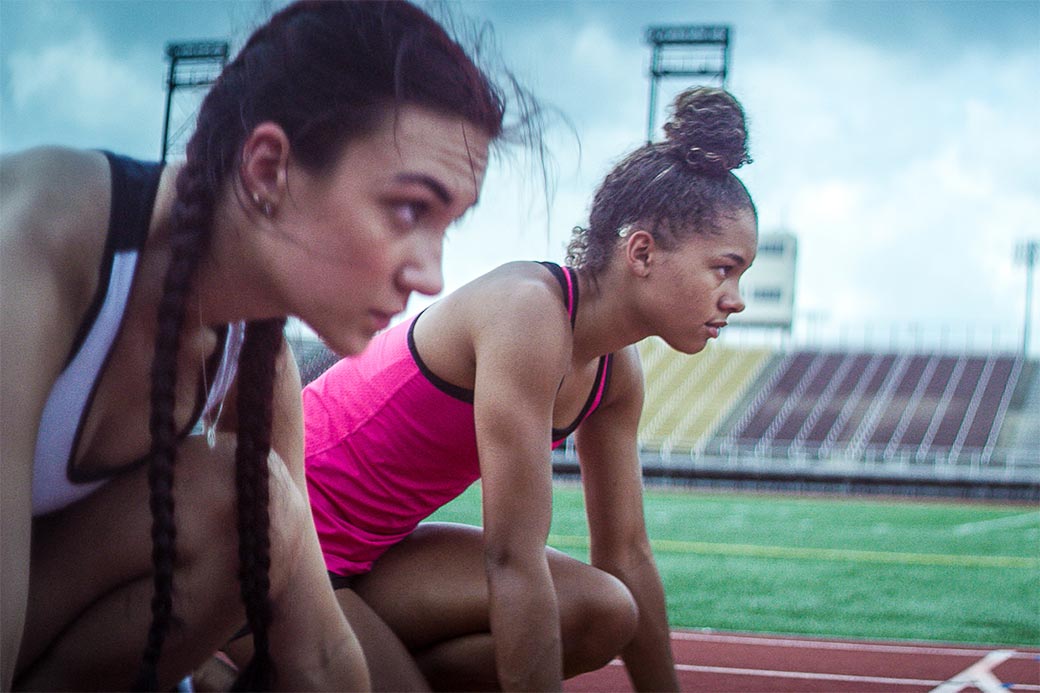 Selina Soule and Alanna Smith are taking a stand to ensure female athletes like them can compete on a level playing field.

It’s very frustrating and heartbreaking when us girls are at the start of the race and we already know that these athletes are going to come out and win no matter how hard you try, Selina said. They took away the spots of deserving girls, athletes … me being included.

Selina, Chelsea, and Alanna are just a few examples. But this problem is growing. You can help defend Selina, Chelsea, Alanna and other female athletes being forced to compete against males. Read more about their case below.

Is this the end for women’s athletics?

Female athletes have made great strides since 1972, when Title IX was passed. Since then, girls have been given many of the same opportunities as their male counterparts.

But now, in schools across our country, those opportunities are being stripped away from female athletes. These girls are losing their spots at high-level competitions. But it’s not because their schools don’t offer their particular sports. And it’s not because they’re not good enough or don’t work hard enough.

“Allowing boys to compete in girls’ sports reverses nearly 50 years of advances for women … We shouldn’t force these young women to be spectators in their own sport.”

After the CIAC adopted a policy that allows biological males who identify as female to compete in girls’ athletic events, boys have consistently deprived female athletes of honors and opportunities to compete at elite levels.

Title IX was designed to eliminate discrimination against women in education and athletics, and women fought long and hard to earn the equal athletic opportunities that Title IX provides, said Alliance Defending Freedom Legal Counsel Christiana Holcomb. Allowing boys to compete in girls’ sports reverses nearly 50 years of advances for women under this law. We shouldn’t force these young women to be spectators in their own sports. 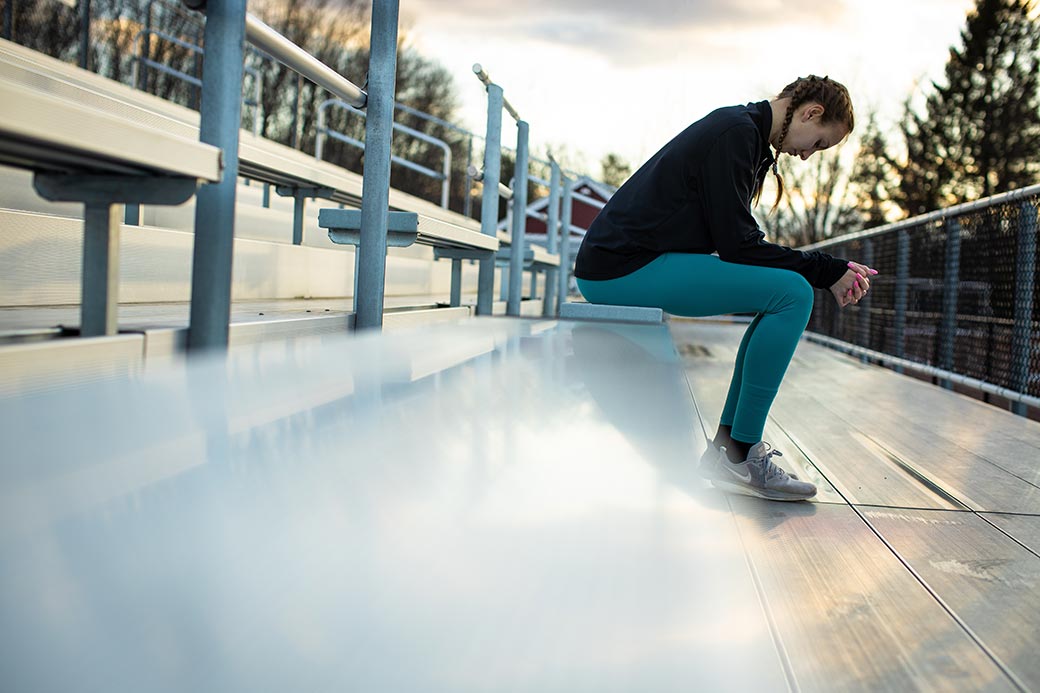 Unless these flawed policies are overturned, female athletics could become completely dominated by biological males, robbing girls and women of countless opportunities.

As an athlete, it can be disappointing to narrowly miss a goal—to be one spot from medaling or a hundredth of a second from a qualifying time.

Selina and her fellow female athletes train countless hours to shave mere fractions of seconds off their race times, said Holcomb. They put in that effort in hope of the personal satisfaction of victory, and opportunity to participate in state and regional meets, or a chance at a college scholarship. But girls competing against boys know the outcome before the race even starts: They can’t win. Boys will always have physical advantages over girls; that’s the reason we have women’s sports. 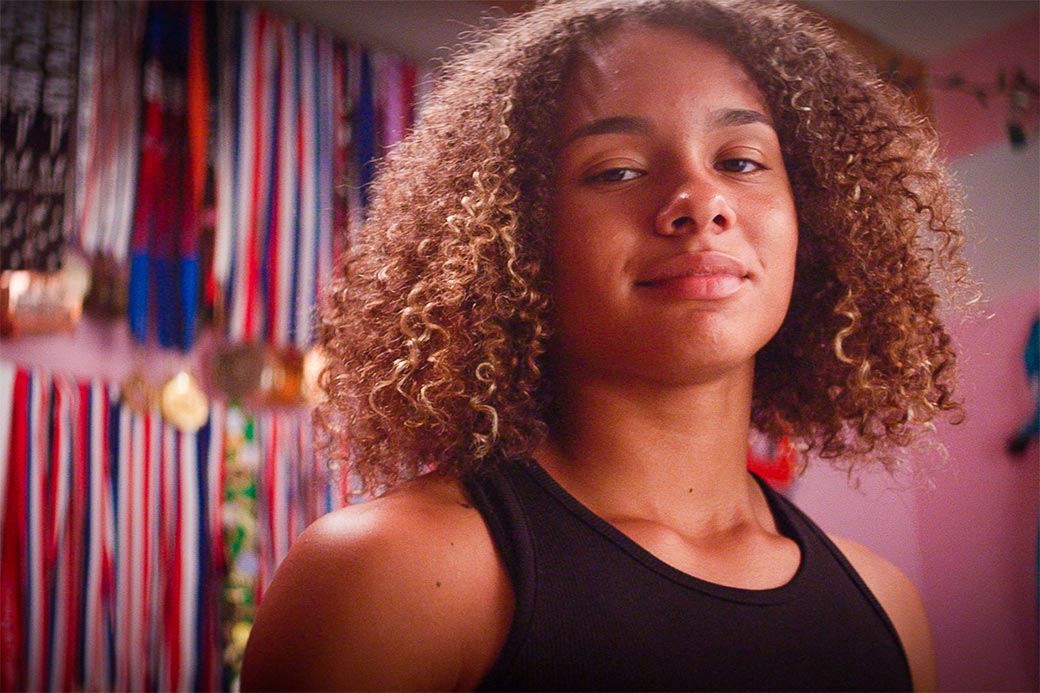 Alanna Smith has worked hard and won a lot of races. But she has many more ahead of her. Allowing male athletes to continue competing against females could seriously jeopardize the future of this rising star.

Threats to women’s athletics across the country

Title IX was designed to ensure that women would receive equal opportunities in education and athletics. But now, biological males are being allowed to compete against girls for potential scholarship opportunities—and they’re winning. Connecticut isn’t the only place where this is happening.

Still, many female athletes have been hesitant to speak out. And it’s no wonder why.

Those who dare to question whether biological males should be allowed to compete against females are ridiculed and bullied. Transgender activists lashed out against tennis legend Martina Navratilova when she wrote that a biological man competing as a woman is “cheating.”

Likewise, when Selina, Chelsea, Alanna, and other female competitors have voiced their criticism, they have been portrayed as sore losers.

Everyone is afraid of retaliation from the media, from the kids around their school, from other athletes, coaches, schools, administrators, said Selina. They don’t want to drag attention to themselves, and they don’t want to be seen as a target for potential bullying and threats.

Since when does speaking the truth make you a sore loser? It is a physiological fact that men and women are built differently. Men have more muscle mass, larger hearts, and greater bone density—making them physically stronger than women.

And, as Navratilova pointed out, Simply reducing hormone levels—the prescription most sports have adopted—does not solve the problem. A man builds up muscle and bone density, as well as a created number of oxygen-carrying red blood cells, from childhood. Training increases the discrepancy.

Additionally, testosterone suppression cannot erase most of these advantages. To preserve fair play for female athletes, we must allow them to compete in their own category.

“Girls deserve to compete on a level playing field. Forcing female athletes to compete against boys is grossly unfair and destroys their athletic opportunities.”

That’s why we have separate men’s and women’s sports. But somehow, the line between the two is becoming increasingly blurry. If we do nothing, women and girls will soon be forced to become spectators in their own sports.

With your help, Alliance Defending Freedom is determined to keep standing against this injustice by challenging these flawed policies being pushed by school authorities and bureaucrats.

Your gift today will make a vital difference

Alliance Defending Freedom has established a strong record of success standing against unelected authorities and bureaucrats who attempt to rewrite laws and violate the freedom of Americans. But your help is critically needed now. Because, for Selina, Chelsea, Alanna, and many others, the stand is just beginning.

God has shown us time and time again that when we stand together, we can be victorious. But standing for fairness and justice isn’t “someone else’s stand.” It’s your stand. It’s our stand.

Please give generously today to stand with Selina, Chelsea, Alanna, and others like them.