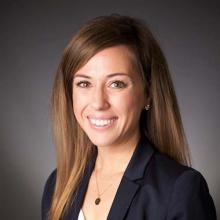 Since joining ADF in 2012, Fiedorek has defended religious liberty, marriage, and the family against legal attacks. She has authored federal and state legislation, and advised members of Congress, governors, state attorneys general, state legislators, and policy organizations on how to preserve First Amendment freedoms.

Fiedorek has testified before state legislatures across the country on the importance of safeguarding religious liberty, free speech, the sanctity of life, and the right to privacy. She has also litigated cases defending the constitutionally protected freedom of citizens to live and work according to their conscience. Her appellate advocacy practice has included authoring and coordinating amicus briefs for pivotal U.S. Supreme Court, federal court, and state court appellate cases.

Fiedorek earned her Juris Doctor from Ave Maria School of Law in 2009. Before graduating from law school, she completed the Alliance Defending Freedom leadership development program to become a Blackstone Fellow in 2008. She is a member of the state bar of Florida, the District of Columbia, the U.S. Supreme Court, and multiple federal appellate courts.