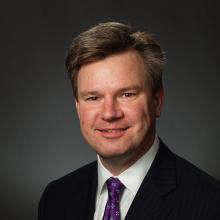 Gregory S. Baylor serves as senior counsel with Alliance Defending Freedom, where he is the director of the Center for Religious Schools and Senior Counsel for Government Affairs.

Since joining ADF in 2009, Baylor has focused on defending and advancing the religious freedom of faith-based educational institutions through advice, education, legislative and public advocacy, and representation in disputes. He has testified about religious liberty issues three times before congressional committees.

Greg regularly comments on religious liberty and higher education issues in television, radio, and print media, including The New York Times, Christianity Today, National Public Radio, and network and cable news programs. Additionally, he serves on the board of directors for the Museum of the Bible and the International Alliance for Christian Education.

Greg earned his Juris Doctor in 1990 from Duke University School of Law, where he graduated Order of the Coif, with high honors, and served on the editorial board of the Duke Law Journal. He received his bachelor’s degree in Honors English in 1987 from Dartmouth College. Following graduation from law school, he served as law clerk to the Hon. Jerry E. Smith on the U.S. Court of Appeals for the Fifth Circuit. He practiced labor and employment law at two large international law firms for three years before joining the staff of Christian Legal Society’s Center for Law and Religious Freedom, where he served for 15 years prior to joining ADF. He lives in Northern Virginia with his wife (a medical doctor) and two daughters.