School voucher programs provide low-income families with schooling options for their children. That is, unless these families live in Maryland and want to send their students to a private school that holds beliefs that the government doesn’t like.

There, state officials targeted a Christian school called Bethel Christian Academy because of its beliefs—and they harmed low-income students in the process.

That’s why this school fought back. Here’s the full story.

What is Bethel Christian Academy?

Bethel Christian Academy is a private Christian school in Savage, Maryland, that serves roughly 220 students in pre-K through eighth grade. Its mission is “to create an authentic Christian learning community to train students to know, love, and serve the Lord Jesus Christ, and to equip them spiritually and academically to be lights to the world.”

And the staff at Bethel is not only dedicated to this mission during school hours. On top of a quality education, Bethel staff provide before- and after-school programs where students can have meals, work on their homework, and participate in activities while their parents are at work.

Bethel Christian Academy is also dedicated to serving children from diverse backgrounds—with students from over 40 different nations, children who recently immigrated to the United States, and families with different religious affiliations (or no religious affiliation at all). Around 90% of the school’s students are from minority populations, and many are eligible to receive financial aid from the state. 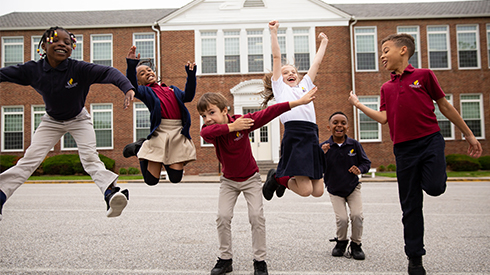 It is because of Bethel’s reputation of providing an excellent education in a diverse, faith-based environment that many of these families choose to send their children to Bethel. And some were only able to do so because of the state’s school voucher program—called BOOST.

But in August 2018, families who received financial aid from the school voucher program were given some unexpected news. The state of Maryland informed these families—only weeks before classes started—that they would no longer be able to use that financial aid at Bethel Christian Academy, leaving many of them scrambling to enroll their students in a different school.

The state also demanded that Bethel pay back the more than $100,000 it had received from families using BOOST funding, which is a serious financial hardship for a small private school like Bethel.

Bethel Christian Academy had participated in the BOOST school voucher program for two years before the state decided it was no longer eligible.

It certainly wasn’t Bethel. In the two years that Bethel participated in the school voucher program, and when Maryland kicked it out, Bethel fully complied with all the BOOST program requirements.

But apparently the state didn’t like what it saw in Bethel Christian Academy’s student handbook.

In addition to stating its belief that marriage is between a man and a woman (the school is run by a church, after all), the handbook requires that students comply with its faith-based conduct standards. These standards include the requirement that students do not engage in any sexual conduct. Keep in mind—Bethel serves only pre-K through 8th grade students. That means all its students are under the age of consent.

Still, the state disqualified Bethel Christian Academy from the BOOST program, claiming the school violated the requirement that “all participating schools must agree that they will not discriminate in student admissions on the basis of race, color, national origin, or sexual orientation.”

But that is simply not true. Bethel admits any qualified student applicant, Christian or not. And it has never, and will never, discriminate against an applicant based on an applicant’s sexual orientation.

It is clear that the state made this decision based solely on its opposition to Bethel’s religious beliefs about marriage.

And that is unconstitutional.

In its decision in Trinity Lutheran Church of Columbia v. Comer, the U.S. Supreme Court ruled that the state cannot treat religious organizations and people worse than everyone else, and the state cannot exclude them from generally available public benefits, simply because of their beliefs.

Bethel tried to fill the gap that the state left. It offered more money in financial aid to help parents cover the cost. It abandoned plans for building upgrades. And it stopped hiring new teachers and was holding off on backfilling vacant positions.

Unfortunately, that still wasn’t enough for the low-income families who rely on the BOOST school voucher program to send their children to the school of their choosing.

Despite Bethel Christian Academy’s best efforts, multiple families had to leave the school and find somewhere else for their children to attend. One working mother of three says the school she had to send her children to is nowhere near as good as Bethel.

But the state of Maryland didn’t care. It was determined to punish Bethel Christian Academy for not falling in line with its ideological agenda—at any cost. And that includes the well-being of the children Bethel serves.

The government shouldn’t be able to treat religious schools worse than everyone else simply because it dislikes the schools’ beliefs. If the government is permitted to do so, it’s the students who suffer the consequences.