Religious Freedom is for Everyone 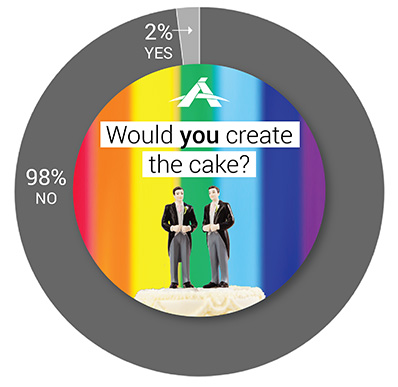 Religious Freedom is for Everyone

Will you give a gift right now to help provide the strong legal defense that Jack — and your religious freedom — needs?

After more than nine years in and out of court, cake artist Jack Phillips is still fighting for his right to freely live out his faith.

In the third legal case against him, Jack has been punished for not designing a custom pink-and-blue cake to celebrate a gender transition that an activist attorney requested.

Even if you disagree with Jack’s choice to decline to create these cakes, you can still agree that no one should be forced to express something that violates their conscience.

That’s where Alliance Defending Freedom (ADF) comes in. ADF is an alliance-building, nonprofit legal organization that advocates for the right of people to freely live out their faith.

With God’s blessing and the support of generous people like you, ADF has grown to become a major force in the legal battle for religious freedom, winning nearly 80% of our cases, including 13 victories at the U.S. Supreme Court since 2011.

We've defended Jack once at the Supreme Court, but his opponents won't give up. We are still fighting for his religious freedom in court.

Jack has never paid a dime for his legal defense, but that’s only possible because people like you give to support his defense. It's been a long battle, but Jack believes it's worth it. Do you?

If so, will you give a gift right now?