Richard remembers lying on a piece of cardboard and praying.

He was homeless and addicted to drugs. He had cut his friends and family out of his life and felt completely alone.

“I remember wishing I could just go to sleep and never wake up," said Richard, “I prayed to God for some kind of change.”

Today, Richard has been drug-free for over 5 years, and he now works for the same ministry that changed his life. “I would describe my life today as blessed and hopeful. I’m able to be there for people. To be God’s hands and make sure that people know they matter.”

Seattle’s Union Gospel Mission cares for over a thousand of its homeless neighbors every day and shows them the love of Jesus that they so desperately need to see.

But right now, the state of Washington is threatening the Christian mission of this important ministry. Read the details of its case below. 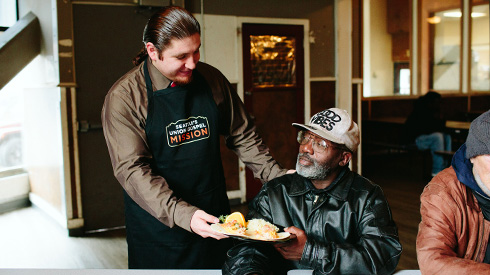 Seattle’s Union Gospel Mission is a nonprofit ministry that began in 1932 as a soup kitchen to feed and care for those suffering from the Great Depression. Today, the Mission lives out its Christian faith by bringing the love of Jesus Christ to over a thousand homeless and hurting people in Seattle every day. Through services like its soup kitchen, mobile showers, and recovery programs, the Mission seeks to restore dignity and help people move to healthy and thriving lives.

This amazing track record is due to the fact that the Mission focuses on bringing the hope of Jesus Christ to everyone. Material assistance means very little without the transforming power of God. And the Mission’s success would not be possible if its employees did not “walk the talk,” let alone actively worked against the Mission’s Christian faith.

That’s why churches and religious institutions, like the Mission, must be able to decide who they employ. If one employee explains to a client what it means to have a new life in Jesus Christ and then another employee contradicts or denies that message, the Mission loses credibility with those that it seeks to serve.

The lawyer was not active in a local church, disagreed with the Mission’s beliefs, and even explicitly stated that he applied for the position hoping to change the Mission’s religious beliefs.

If the Mission wants to continue sharing the Gospel message of new life in Christ with its homeless neighbors, it cannot hire people who disagree with its Christian beliefs.

For this reason, the Mission found a lawyer who met its religious hiring criteria.  But the applicant who didn’t get the job challenged the Mission in court.

The lawyer filed a lawsuit against Seattle’s Union Gospel Mission in 2017.

In March of 2021, Washington’s Supreme Court ruled that the Mission must decide: shut down its religious ministry, leaving thousands of homeless men and women in Seattle without its vital services, or violate its Christian faith. Neither of these is acceptable.

This is a clear violation of the First Amendment right to religious freedom. So, with the help of Alliance Defending Freedom attorneys and our co-counsel, the Mission is asking the U.S. Supreme Court to take up its case.

The city had the third-largest homeless population in the United States according to federal data released in 2018.

And that population is growing faster than any other city. In 2020, there were over 11,000 homeless people in the surrounding county, with nearly half of those people living outside of shelters. The Mission’s ministry is certainly greatly needed!

Why: So that Seattle’s Gospel Union Mission Can Continue Helping the Homeless According to Its beliefs

There are thousands of people in Seattle just like Richard. People who need the help and care that the Mission provides. You would think that Washington would be grateful for institutions that help citizens escape harrowing situations like homelessness and drug addiction.

But, instead, the Mission is being told to either violate its Christian beliefs or stop its religious ministry. If the government can dictate who the Mission can hire, it can demand that other institutions violate their beliefs as well—it can demand a synagogue employ a Christian or a Muslim ministry hire an employee who lives inconsistently with the Koran.

We all benefit when faith-based institutions are free to care for the poor and needy without government interference in internal matters of faith.

The government should stay out of churches and religious ministries’ internal faith matters.

Learn More about the Mission's Case:

Even Ruth Bader Ginsburg Has Criticized Roe...Now It Could Be Overturned

Today, the U.S. Supreme Court is hearing arguments in Dobbs v. Jackson Women’s Health Organization, a case that could overturn Roe and return the issue of abortion to the states.