Skip to content
This article was most recently updated on April 18, 2022.

Today, the U.S. Senate heard testimony on the “Equality Act”—a piece of legislation that would add “sexual orientation” and “gender identity” to federal nondiscrimination laws.

In theory it may sound nice. But in reality, as journalist Abigail Shrier testified, “it applies a wrecking ball to women’s sports.”

Since my freshman year in 2017, high school track and field events in my home state of Connecticut have become a spectator sport—at least for female athletes. That was the year the Connecticut Interscholastic Athletic Conference (CIAC) changed its policies to allow male athletes who identify as female to compete as girls.

Every season I’ve felt the impact of this new policy—not advancing, not medaling, not being named All-New England. And, eventually, not being the State Champion. Four times I lost the State Champion title to a male athlete. Sure, I told myself I was the fastest girl there. But college scouts don’t care about my internal consolations. They care about times, rankings, and final results.

When my parents questioned the rationality of the policy that was clearly denying opportunities to female athletes in the state, the responses were shocking.

We were told that males have no biological advantage in sports over females. That there is no difference between me and a biological boy who identifies as a girl. And that Title IX only gives girls a right to participate—not to win.

But if that was the case, we wouldn’t need Title IX at all.

That’s why I’ve joined three other high school girls in filing a lawsuit against the CIAC. It’s also why I oppose the “Equality Act.”

If the “Equality Act” is passed, it would make what happened in Connecticut a nationwide reality.

It’s a scientific fact that there are significant differences between males and females. Males have more muscle mass, greater bone size, and even greater heart and lung capacity—which makes comparably gifted and trained males stronger and faster.

Title IX was created to provide women and girls with equal educational and athletic opportunities. But forcing female athletes like myself to compete against biological males strips away both of these things.

Every boy on the podium means one fewer girl on the podium. And girls like myself aren’t losing just the opportunity to win, and the life lessons of fair competition, but opportunities to earn college scholarships and launch our own athletic careers beyond high school.

Is it fair to force female athletes to compete against boys? Is it fair that girls are being told to keep our mouths shut—that if we want to win we’ll have to train harder and run faster to beat the boys?

Of course it’s not. I know it. The CIAC knows it. Our elected representatives know it.

Because treating girls differently than boys—depriving them the chance to be champions—is exactly what Title IX was supposed to prevent.

As Senator Chuck Grassley read from my written testimony in today’s hearing: “It isn’t fair and it isn’t right. We need separate sports categories based on biological sex in order to fairly compete. This is what Title IX was intended to protect and preserve.”

And I’m hoping that our elected representatives won’t ignore the voices of female athletes like me in favor of political gain. 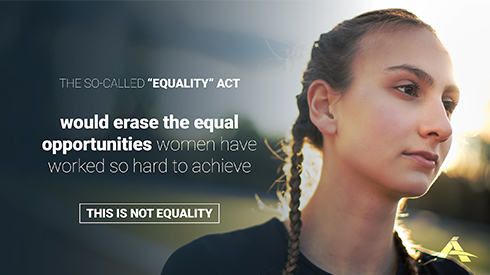