I’ll never forget watching the men’s 4x100 freestyle relay at the 2008 Olympic Games, when (spoiler alert!) Team USA caught up to and passed France in the final leg to win the gold. It was a thrilling comeback. The stuff of legend.

Track and field athletes at the 2020 Indoor Big Sky Conference Championships earlier this year also got to witness a huge comeback during the women’s distance medley relay.

But there was one major difference. While the male Olympic athletes were competing on a level playing field, the athletes at the Big Sky Conference were not. You see, one of the athletes on the University of Montana women’s team is June Eastwood, a male athlete who identifies as a female.

It was Eastwood who anchored Montana’s distance medley relay. During the final 1600-meter leg, Eastwood advanced the Montana team not one or two, but four positions. Instead of finishing sixth, the Montana team finished second—earning a spot on the podium as well as an additional five team points.

Unfortunately, more and more often, women and girls find themselves in these unfair situations where they are forced to compete against males who identify as female.

That’s why Idaho recently passed the Fairness in Women’s Sports Act. This commonsense legislation protects equal opportunities for women and girls in sports. But the ACLU is challenging this law, demanding that male athletes who identify as females be permitted to compete in women’s sports.

Today, the U.S. Department of Justice filed a statement of interest in federal district court supporting a level playing field for female athletes. In its statement, the DOJ correctly points out that the Constitution’s “Equal Protection Clause” allows Idaho to recognize that there are physiological differences between males and females.

Last month, Alliance Defending Freedom asked to intervene in this lawsuit on behalf of two college athletes at Idaho State University—two young women who have witnessed firsthand what it looks like when male athletes are allowed to compete as females.

In fact, Idaho State University is one of the teams that was ahead of Montana State until the last leg of the distance medley relay, when Eastwood took control of the race. As a result, Idaho State finished in fifth rather than fourth place.

And now, two Idaho State athletes are speaking up in support of the Fairness in Women’s Sports Act to preserve not only their own opportunities in athletics, but the opportunities of women and girls in schools and colleges across Idaho. 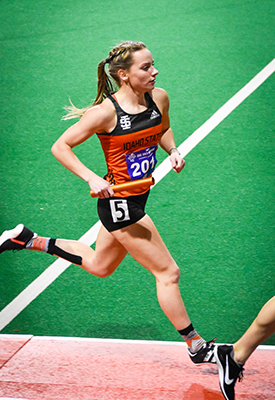 Madi is a rising sophomore at Idaho State University where she runs track and cross-country. In the fall of 2019, Madi’s cross-country coach informed the team that they would be racing against Eastwood, a male.

So Madi started doing some research. She found that in the previous three years, when Eastwood competed on the University of Montana’s men’s team, Eastwood had posted times in several events that were faster than the women’s national records.

And then Madi experienced it for herself. Madi ran against Eastwood in the 3-mile, 5k, and 6k events and lost by a significant margin. She was a part of the Idaho State relay team that was caught and passed by Eastwood in the final leg. And she also watched as Eastwood bumped one of her teammates out of third place—and off the medal podium—in an individual event at the Big Sky Conference Championships

When the Idaho legislature was considering the Fairness in Women’s Sports Act, Madi read it for herself. As a biology major, she knows there are differences between men and women—and she’s seen those differences in action on the track.

When the ACLU filed a lawsuit challenging the Fairness in Women’s Sports Act, she knew she had to take a stand. 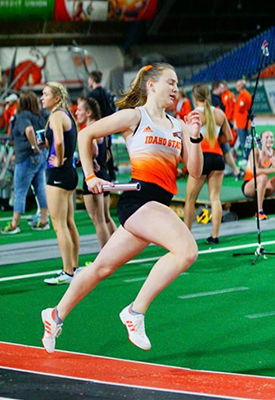 Mary is a rising junior at Idaho State where she also participates in track and cross-country.

Mary discovered her talent and passion for running somewhat accidentally. Her original love was basketball, which she participated in from the age of seven or eight until her sophomore year of high school. She started running track in eighth grade and started running cross-country in high school to get in shape for basketball. Eventually, she came to realize that her love for running had surpassed her love for basketball.

From there, she earned a scholarship to compete in track and cross-country at Idaho State.

Mary, along with Madi and their other teammates, learned that they would be competing against Eastwood in the fall of 2019. And Mary did find herself at the starting line next to Eastwood. Like Madi and most other girls, she lost.

That’s why Mary was so excited when she heard about the Fairness in Women’s Sports Act in Idaho. And it’s why she is taking a stand now to defend it.

Both Madi and Mary have benefited from sports in many ways: Their participation has helped them develop work ethic, time management skills, and lifelong relationships. Not to mention it has helped them pay for school.

They are taking a stand to ensure that the female athletes coming after them have the same access to these benefits.

“I want my future daughters and other young girls to be able to have the same experiences and opportunities that I had. I want my teammates’ and my hard work to pay off. I work to be competitive,” says Madi. “I do not want to see women’s sports fade away as a separate category because males who identify as females are allowed to compete in women’s divisions as if they were women.”

To support these courageous female athletes and others like them, consider signing your name to this petition calling for the athletic and academic futures of young women across the country to be safeguarded.

These 4 Students Refused to Be Silenced

Read about these four students and their courageous stand for campus free speech in the latest edition of Faith & Justice magazine.

This bodes well for churches and other houses of worship across the country that have been treated unfairly by COVID restrictions.

Why This Student Was Canceled for a Catholic Message

It has been said that difficult circumstances don’t create character but reveal it. That is certainly true of Jack Denton, a senior at Florida State University.