Steve and Bridget Tennes, both veterans, have served their local community through their family farm, Country Mill Farms. They grow apples, peaches, blueberries, sweet corn, and pumpkins, and they host community events throughout the year.

Since 2010, they also sold their produce at a farmer’s market in East Lansing. Their customer service was so impeccable that the city invited Country Mill Farms back year after year.

But then something changed. And now Steve Tennes and his family has found themselves in the middle of a legal battle with the city. 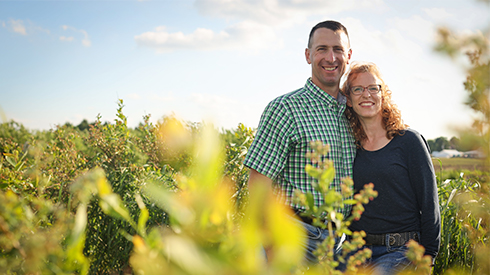 Who: Steve and Bridget Tennes of Country Mill Farms

Steve Tennes grew up at Country Mill Farms in Charlotte, Michigan—he was born the day after one of the apple orchards was planted. The two met in ROTC when Bridget was studying to become a nurse. After both serving in the military—Steve in the U.S. Marine Corps and Bridget in the U.S. Army—they decided to move back to Michigan to take over the operation of his family’s farm where they are now raising their own children.

And they do just that. Their Catholic faith shines through in everything they do at the farm, where their mission is “to glorify God by facilitating family fun on the farm and feeding families.”

One way they fulfill their mission is through the annual =”"_blankʺ”>

They also employ and provide quality, exceptional housing for the seasonal workers who are considered part of their farm family. And they actively support the Farmer Veteran Coalition, which helps veterans enter the farming profession after military service.

In August 2016, someone posted on Country Mill Farms’ Facebook page, asking about their beliefs on marriage. Steve and Bridget are Catholic, so they answered honestly, expressing their belief that marriage is between one man and one woman.

Officials in the City of East Lansing disagreed with Tennes’s beliefs. So starting less than two days after his post, they began pushing Tennes to leave the market.

First, these officials asked the Tennes family to agree not to vend at the upcoming market. When Steve Tennes decided to continue serving all of his customers at the Market, the City created a new policy designed specifically to bar Tennes from future markets.

The City then barred the vendor selection committee from inviting Tennes to the 2017 Market, as they had every year since 2010. And when Tennes applied on his own, the City pulled his application from committee review and rejected it.

The city had banned Steve and Bridget from the farmer’s market not because of something they did, but because of their beliefs about marriage.

In August 2016, the City of East Lansing first attempted to force the Tennes family out of the farmer’s market.

In May 2017, Alliance Defending Freedom attorneys filed a complaint against the city on behalf of Country Mill Farms and quickly sought a preliminary injunction which would require the city to allow Steve back in the farmer’s market as the case proceeded. The Court granted that request and allowed Country Mill Farms back at the end of 2017, and for the 2018, 2019, 2020, and 2021 farmer’s market.

The case is currently in the U.S. District Court for the Western District of Michigan.

Country Mill Farms is located in Charlotte, Michigan—about 22 miles outside of the city of East Lansing.

Why: To Protect Our First Amendment Freedoms

Steve and Bridget Tennes have served their community, not only with their U-Pick programs and fresh produce, but by donating thousands of apples to food banks. All they want to do is run their farm consistently with their deeply held beliefs.

“All Americans should be free to live and speak according to their deeply held religious beliefs without fear of government punishment,” said ADF attorney Kate Anderson. “Yet East Lansing officials changed their market policy to target and shut out Steve Tennes because they don’t like his Catholic beliefs regarding marriage.”

This is a violation of the First Amendment. And it should concern all of us who want to live and speak freely.

People of faith should be free to live and work according to their beliefs without fear of being banned from the marketplace.