ACLU Debunked! The Real Facts About Men in Women’s Sports

In a series of tweets that set off a firestorm on social media, the American Civil Liberties Union (ACLU) claimed to debunk “myths” about school sports and athletes who identify as transgender. The ACLU labeled legislation that protects a level playing field for female athletes as “discriminatory, harmful, and unscientific.”

Among the supposed “myths” the ACLU cited?

But the ACLU can’t dismiss biological realities by simply labeling them as “myths” and calling anyone who says otherwise a “white supremacist.”

The truth is that men and women are different, and those differences matter. When our laws and policies ignore this fact, it is more often women who get hurt. This has become very clear in the arena of athletics, where a level playing field for female athletes is being threatened. Yet, policies that allow male athletes to compete in the female category have been implemented in states and localities across the country, and it’s being encouraged by the Biden administration.

Let’s examine some facts that the ACLU would claim to be “discriminatory, harmful, and unscientific.”

FACT: No amount of testosterone suppression can undo a male’s athletic advantage. 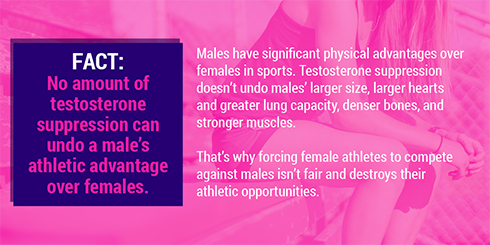 Biological males possess significant physical advantages over females in sports. Suppressing their testosterone doesn’t make their bodies or their hearts smaller, diminish their greater lung capacity, or weaken their bones. 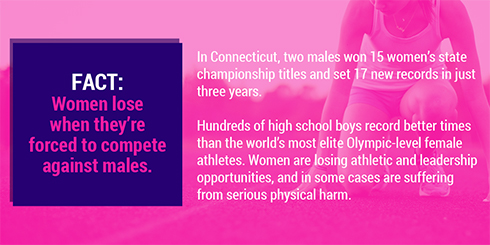 Further, high school male athletes have recorded faster times than Olympic-level female athletes. For example, Allyson Felix is the “most successful female track athlete” of all time. According to researchers, her personal best in the 400 meters is 49.26 seconds. In 2017 alone, “men and boys around the world outperformed her more than 15,000 times” (emphasis mine). 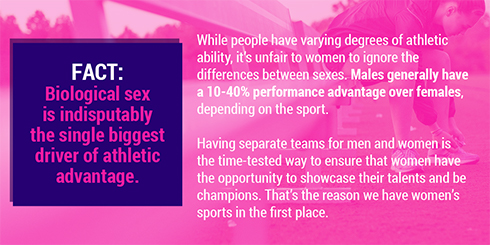 Considering the facts cited above, it’s most fair for sports teams to be divided along biological lines, not gender identity.

Biological sex is the single biggest driver of athletic advantage. Degrees of performance vary between the sexes, but, depending on the sport, males generally have a 10-40 percent performance advantage over females.

Separating teams for males and females ensures that female athletes can showcase their talents. Title IX was created to allow this fair competition and helps drive professional opportunities down the road. More than 90 percent of female executives were athletes.

Ignoring the important fundamental reality of how we are created as human beings is not helpful. Nor does it do any favors to talented female athletes.

The record shows that organizing sports teams based on gender identity harms (and will continue to harm) female athletes.

Share this post on social media and help highlight the biological truth that men and women are different, and that difference matters—particularly in sports.

Charles is a Tennessee native and lover of books and basketball.

New York State refuses to respect or even tolerate sincere faith beliefs and has launched a new attack against New Hope.