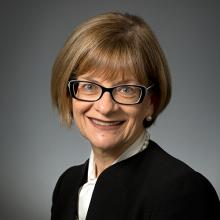 Ruth Ross is the immediate past Chair and former Deputy Executive Director of Advocates International (AI), which has helped to build over 100 national Christian lawyer organizations and has formally linked 156 nations. She continues to serve on AI’s Governance Board and Global Council. Prior to this, she spent more than a decade as the Executive Director of Christian Legal Fellowship of Canada (CLF), the largest member association of Christian legal professionals in Canada with nearly 700 active members from several dozen Christian denominations

Now a board member for Alliance Defending Freedom (ADF), Ruth has served ADF on the Global Advisory Council and participated as both a speaker and attendee at ADF Academies.  In addition, she serves on several Canadian Boards including the Billy Graham Evangelistic Association and Samaritan’s Purse.

She completed her B.A. and LL.B. from Dalhousie University and has over 20 years of legal experience.   She has practiced law in four provinces of Canada and is currently a member of the Ontario Bar.  She was admitted to the Law Societies of New Brunswick (1975), Nova Scotia (1979), British Columbia (1983), and Ontario (1985).

Ruth and her husband Pat reside in London, Ontario.  They enjoy a vibrant family life and together are blessed with five adult children (two of whom serve in the legal profession) and five grandchildren.