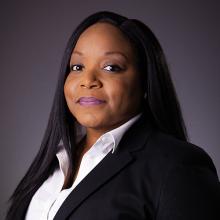 Wyatt graduated with a J.D. from Fordham Law School and an M.B.A. from Fordham Graduate School of Business. After graduation, she worked as a tax associate at Arthur Andersen in New York, before spending six years at HSBC Bank, starting as an associate in the Wealth and Tax Advisory Services division, and continuing on to become vice president and senior manager of Compliance and Anti-Money Laundering.

Wyatt later served as a vice president and attorney at Morgan Stanley in New York. She then moved to Washington, D.C., where she spent six years as a business manager at Crowell & Moring and served as director of the Litigation Department at Wilmer Hale for five years before joining ADF.